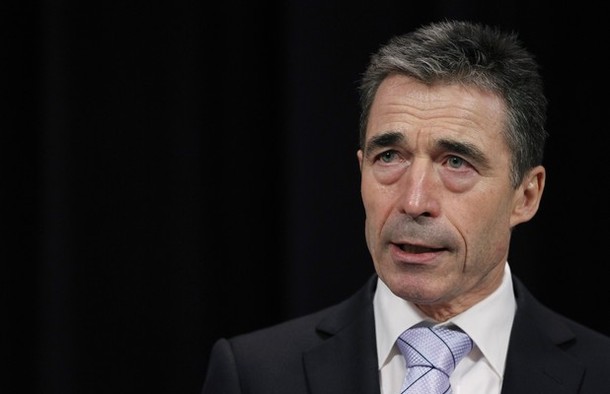 From Fatma Demirelli, Today’s Zaman:  In an exclusive interview with Today’s Zaman in Brussels last week, NATO Secretary-General Anders Fogh Rasmussen added his voice to the growing regional controversy over the nascent missile defense system , telling Iranians that they have no reason to be worried unless they are planning to attack a NATO territory and making clear that deterioration in Turkey’s ties with NATO’s regional partner, Israel — no matter how undesirable — will have no effect on Ankara’s place within the 28-member alliance.

“I have followed these statements,” Rasmussen said at his office when asked about the Iranian threats against Turkey. “They are completely unfounded, because NATO’s missile defense system is a defensive system. It is not directed against any specific state; it is directed against a threat, a missile threat,” he added, adding that there are now more than 30 countries in the world that either have missile capabilities or are in the process of acquiring them. “Some of them have a range that can hit a NATO territory. This is the reason we have decided to establish the NATO system: to defend, not to attack,” he said.

“So, actually, to speak quite bluntly about it, you can only consider our missile defense system a threat if you have an intention or an idea that you want to attack a NATO territory. If you don’t have that intention, then our system is really, purely a defensive system with an aim to protect our populations against any missile threat, wherever it might come from,” said the chief NATO official.

NATO plans to announce an “interim” missile defense capability at its upcoming Chicago summit in May, focused at this stage only on the protection of forward-deployed troops, and a system with the capability to protect NATO populations and territory in Europe is expected to be fully operational in 2020. The X-Band radar deployed at a military base in Kürecik, a town in eastern Anatolia, has already become operational. . . .

Rasmussen, who will visit Turkey later this week to mark the occasion of the 60th anniversary of Turkey’s NATO membership, also praised Turkey’s strong role in the alliance despite calls from some conservative US politicians and others that Turkey should be expelled from NATO because it is moving away from the West and towards the Muslim world. Texas Governor Rick Perry made the call for the expulsion of Turkey from NATO just before he withdrew from the US presidential race, citing, among other things, its turning away from Israel.

“We know that there are disputes between Turkey and Israel. I consider them a bilateral question that will not affect Turkey’s position as a member of the alliance and a staunch ally,” Rasmussen said. . . .

Rasmussen also reiterated, pointedly, that NATO has no plan to intervene in Syria . . .

“We have no intention to intervene in Syria, partly because the conditions are different; there is no UN resolution, there is no support from the region. And furthermore, I think Syria is quite another case. Ethnically, politically, religiously, Syria is different, compared to Libya. For these reasons, I don’t think it would be helpful if NATO engaged,” he said.  (photo: Reuters)