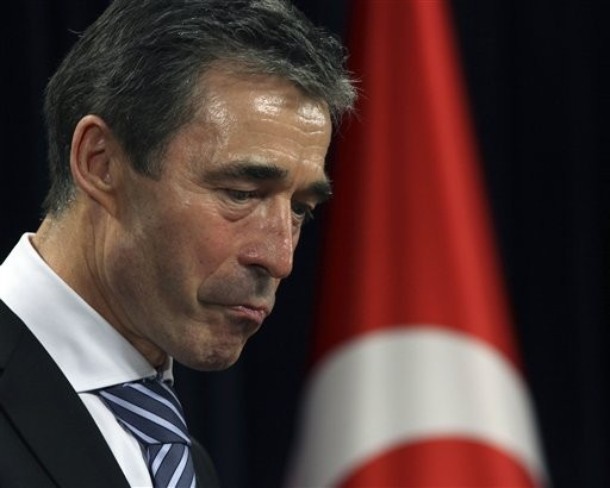 From Simon Cameron-Moore and Tulay Karadeniz, Reuters:  NATO Secretary-General Anders Fogh Rasmussen said the Western alliance had no intention of intervening in Syria even in the event of a U.N. mandate to protect civilians, and urged Middle East countries to find a way to end the spiraling violence.

"We have no intention whatsoever to intervene in Syria," Rasmussen said in an interview, during a visit to mark the 60th anniversary of Turkey joining the alliance.

While NATO had acted under a United Nations mandate to protect civilians in Libya and had also received active support from several fellow Arab countries, neither condition had been fulfilled in Syria.

Asked if NATO’s stance would change if the United Nations provided a mandate, Rasmussen was doubtful.

"No, I don’t think so because Syria is also a different society, it is much more complicated ethnically, politically, religiously. That’s why I do believe that a regional solution should be found," he said.  (photo: AP)