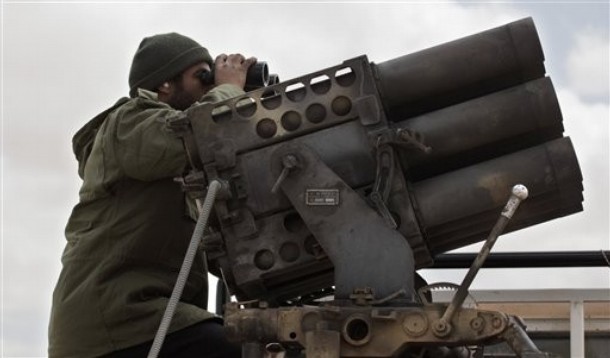 From Thom Shanker and Charlie Savage, the New York Times:  Members of the NATO alliance have sternly warned the rebels in Libya not to attack civilians as they push against the government of Col. Muammar el-Qaddafi , according to senior military and government officials.

As NATO takes over control of airstrikes in Libya, and the Obama administration considers new steps to tip the balance of power there, the coalition has told the rebels that if they endanger civilians, they will not be shielded from possible bombardment by NATO planes and missiles, just as the government’s forces have been punished.

“We’ve been conveying a message to the rebels that we will be compelled to defend civilians, whether pro-Qaddafi or pro-opposition,” said a senior Obama administration official. “We are working very hard behind the scenes with the rebels so we don’t confront a situation where we face a decision to strike the rebels to defend civilians. …”

Oana Lungescu, the senior NATO spokeswoman, emphasized that NATO was taking action because Colonel Qaddafi’s forces were attacking Libyan civilians, including shelling cities with artillery. If the rebels do likewise, she said, the organization will move to stop them, too, because the United Nations Security Council resolution “applies to both sides.”

“Our goal, as mandated by the U.N.,” Ms. Lungescu said, “is to protect civilians against attacks or threats of attack, so those who target civilians will also be targets for our forces, because that resolution will be applied across the board.”

Calls by some NATO members to provide heavier weapons to the rebels suggest that these worries will only intensify. …

At times when the rebels are gaining ground, the allies fear that the rebels will inevitably try to take loyalist cities by force, and could end up endangering or even killing civilians there. That is what prompted the coalition’s warnings to the rebels, administration officials said.

The specifics of the warnings — like when they were conveyed, who delivered them, and to which rebel leaders — remained unclear.  (photo: AP)