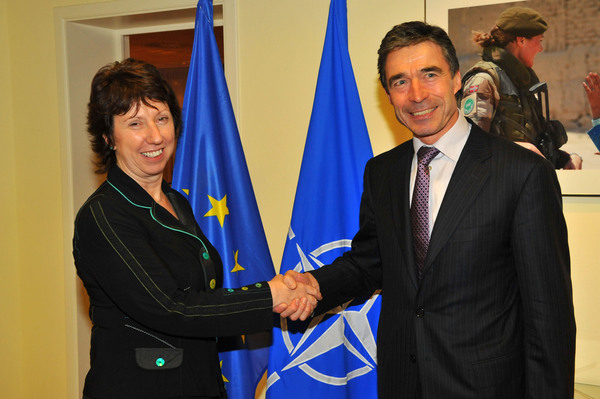 From NATO: NATO’s relations with the European Union go back twenty years: the 1992 Maastricht Treaty was the first EU treaty to mention NATO. Today, at a time of financial crisis and reductions in defence budgets, it is more important that ever for the two organizations to strengthen cooperation, spend more intelligently, and improve the complementarity of their defence capabilities in order to meet common security challenges. . . .

NATO’s smart defence initiative is a new approach which seeks to better align the collective requirements and national priorities of Member States. Instead of pursuing purely national solutions, Allies have decided that where it is efficient and cost-effective, they will seek out more multinational solutions, including for acquisition, training and logistic support.

For its part, the EU, via its European Defence Agency, has made good progress in its “pooling and sharing initiative”, particularly in the areas of tanker aircraft, modular field hospitals, training courses for helicopter pilots and maritime surveillance. Tanker aircraft are a particularly crucial capability. They are a costly investment, but they are essential in the long-distance deployment of forces as support to other aircraft.

NATO and EU staffs are closely coordinating this work to avoid overlaps between the “smart defence” and the “pooling and sharing” initiatives.

"The financial crisis is one more reason why we should strive for greater cooperation between the European Union and NATO. The benefit is clear. If we work together, then both our institutions can emerge stronger from these times of economic difficulty,” explained NATO Secretary General Anders Fogh Rasmussen, addressing the chairmen of parliamentary committees on foreign affairs from across the EU in March 2012.

High Representative Catherine Ashton has also stressed the need for continuing cooperation in this area. "The EU relationship with NATO is essential. The breadth of EU instruments can be usefully combined with the depth of NATO’s role on defence. The two organisations must continue to reinforce each other’s work. The Libya crisis again showed the clear need for this,” she said at the annual conference of the European Defence Agency in January 2012. “On capabilities in particular, whether labelled Pooling & Sharing or Smart Defence, we have achieved an unprecedented level of cooperation.”

The Alliance and the EU are two of the most important institutions in the world with complementary skills and assets. While the NATO-EU partnership has yet to fulfil its strategic potential much progress has been made, over the past twenty years, in developing a framework for close cooperation.  (photo: NATO)