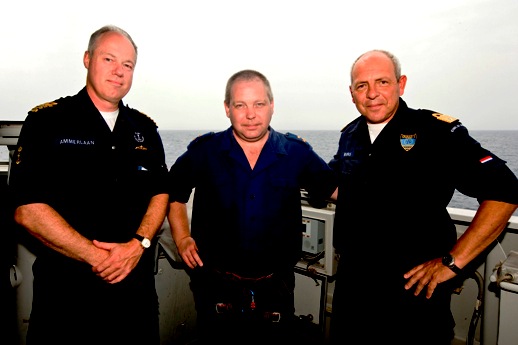 The two commanders had met earlier in June when their ships rendezvoused in the Atlantic Ocean on their way to the Gulf of Aden, where they spoke of possible future cooperation. Now approximately six weeks later, the Russian ship RFS Admiral Levchenko was once again invited to rendezvous with the NATO flag ship to share information and to discuss future ways of collaboration between NATO and the Russian Federation in the area of counter piracy.

The Chief of Staff of the NATO Task Force, Commander Ricardo Hernandez (Spanish Navy), said: “Every meeting with commanders and representatives of other counter piracy task forces is extremely useful and it will greatly benefit the operation. The operation area is a vast space, comparable to the size of the continent of Europe, and therefore any opportunity to discuss the coordination of counter piracy units will help safeguard the shipping lanes off the Horn of Africa.”  (photo: NATO)