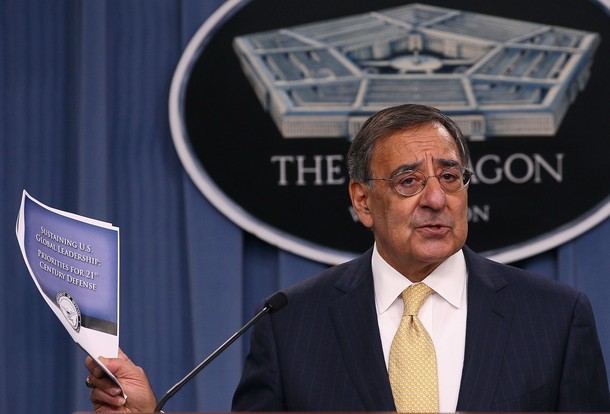 From the Department of Defense:  The United States has played a leading role in transforming the international system over the past sixty-five years.  Working with like-minded nations, the United States has created a safer, more stable, and more prosperous world for the American people, our allies, and our partners around the globe than existed prior to World War II. . . .

U.S. economic and security interests are inextricably linked to developments in the arc extending from the Western Pacific and East Asia into the Indian Ocean region and South Asia, creating a mix of evolving challenges and opportunities.  Accordingly, while the U.S. military will continue to contribute to security globally,  we will of necessity rebalance toward the Asia-Pacific region.  Our relationships with Asian allies and key partners are critical to the future stability and growth  of the region.  We will emphasize our existing alliances, which provide a vital foundation for Asia-Pacific security.  We will also expand our networks of cooperation with emerging partners throughout the Asia-Pacific to ensure collective capability and capacity for securing common interests. . . .

In the Middle East, the Arab Awakening  presents both strategic opportunities and challenges.  Regime changes, as well as tensions within and among states under pressure to reform, introduce uncertainty for the future.  But they also may result in governments that, over the long term, are more responsive to the legitimate aspirations of their people, and are more stable and reliable partners of the United States.

Our defense efforts in the Middle East will be  aimed  at  countering  violent  extremists  and destabilizing threats, as well as upholding our commitment to allies and partner states. . . .

Europe is home to some of America’s most stalwart allies and partners, many of whom have sacrificed alongside U.S. forces in Afghanistan, Iraq, and elsewhere.  Europe is our principal partner in seeking global and economic security, and will remain so for the foreseeable future.  At the same time, security challenges  and  unresolved  conflicts  persist  in  parts  of Europe and Eurasia, where the United States must continue to promote regional security and Euro-Atlantic integration.  The United States has enduring interests in supporting peace and prosperity in Europe as well as bolstering  the strength and vitality  of  NATO,  which  is critical to the security of Europe and beyond.  Most European countries are now producers of security rather than consumers of it.  Combined with the drawdown in Iraq and Afghanistan, this has created a strategic opportunity to rebalance the U.S. military investment in Europe, moving from a focus on  current conflicts toward a focus on future capabilities.  In keeping with this evolving strategic landscape, our posture in Europe must also evolve.    As  this  occurs,  the  United  States  will maintain our Article 5 commitments to allied security and promote enhanced capacity and interoperability for coalition operations.  In this resource-constrained era, we will also work with NATO allies to develop a "Smart Defense" approach to pool, share, and specialize capabilities as needed to meet 21st century challenges.  In addition, our engagement with Russia remains important, and we will continue to build a closer relationship in areas of mutual interest and encourage it to be a contributor across a broad range of issues.