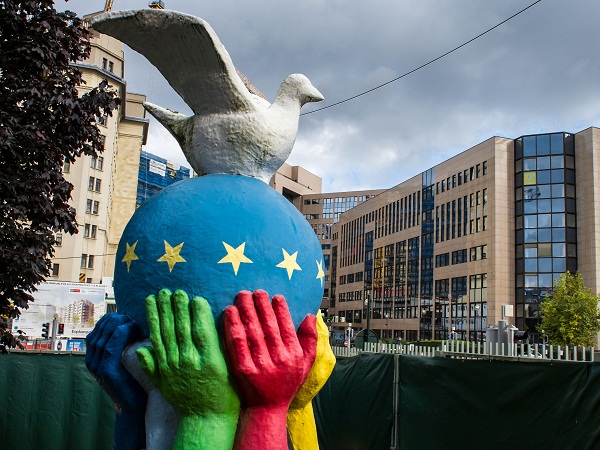 From James Joyner, New Atlanticist:  The Norwegian Nobel Committee surprised most observers with its award of the peace prize to the European Union for its contributions to "the advancement of peace and reconciliation, democracy and human rights in Europe. . . ."

Still, as UN Dispatch‘s Mark Leon Goldberg  notes, the lack of major European wars since 1945 is rather impressive, given how common inter-European strife had been in the previous centuries. Indeed, the Nobel committee outlines that rationale in its award announcement, noting, “The dreadful suffering in World War II demonstrated the need for a new Europe. Over a seventy-year period, Germany and France had fought three wars. Today war between Germany and France is unthinkable.”

But the committee then leaps to an odd conclusion: “This shows how, through well-aimed efforts and by building up mutual confidence, historical enemies can become close partners.” Carleton College political scientist Steve Saideman notes the obvious elephant in the room: "If you want to give the EU an award for keeping the post-war peace, it should be behind NATO in line." Charlemagne agrees, "Surely NATO and the presence of American forces has been an equally, if not more important factor in keeping the peace in Europe through the decades of the cold war. And it was intervention by America more than Europe, be it as the EU or individual countries, that eventually put a stop to the bloodletting in the ex-Yugoslavia."

Daftest of all is the notion that the EU itself has kept the peace. It was the Allies led by the Americans, the Russians and the British who defeated and disarmed the Germans in 1945. The German people then underwent the most extraordinary reckoning, transforming their country into an essentially pacifist society. The EU had very little to do with it. Throughout that period it was Nato, led by the Americans and British, which kept the peace in Western Europe.

When the EU has been confronted with a problem of war and peace, people suddenly realize it is a composite of countries with varying interests and commitments and not a single foreign policy-producing entity. The EU failed its first big test when Yugoslavia fell apart. Its recognition of Slovenia and Croatia did not cause anything really but demonstrated that conditions did not matter more than intra-EU wrangling since Macedonia met the conditions more than Croatia. The EU split over Iraq 2003, and did not do much more than twitch over Libya. So, the EU’s record as a force for peace beyond its members is pretty lame.

James Joyner is managing editor of the Atlantic Council. This essay was published by The National Interest , expanding on a previous New Atlanticist essay. Photo credit: AP/Geert Vanden Wijngaert.