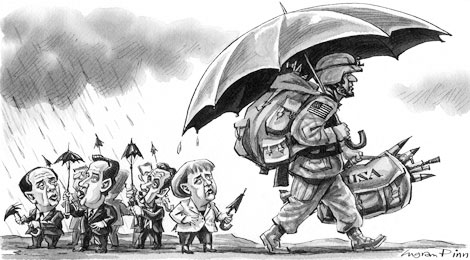 From Philip H. Gordon and Alexander Vershbow, the Financial Times:  We read with interest, but also surprise, Philip Stephens’ comment on America’s presence in Europe. (“Hooray! The Yanks are going home”, April 14). Given the broad array of challenges that the US and Europe face together, we applaud Mr Stephens’ call for more and smarter European spending on defence. But those challenges, and the importance of the US-European partnership in meeting them, also explain why, contrary to Mr Stephens’ assertions, the US is by no means reducing its commitment to Europe.

We are adapting that commitment to new realities – the troop decision Mr Stephens refers to being one case in point. After extensive review and broad consultations with allies, President Barack Obama decided to reverse the Bush administration’s decision to withdraw two of the four US combat brigades in Europe and instead decided to retain three, as of 2015. Those brigades will be complemented by new forward deployments of Aegis ships and special operations aircraft, a permanent aviation detachment in Poland, and land-based missile defence systems in Poland and Romania. In the end, with the winding-down of the mission in Afghanistan, there will likely be more US forces in Europe in 2015 than there have been for the past decade. . . . .

President Obama understands the value of the US partnership with Europe. . . . .

The Libya operation demonstrates clearly why Nato remains essential to America, and why America is still essential to Nato.