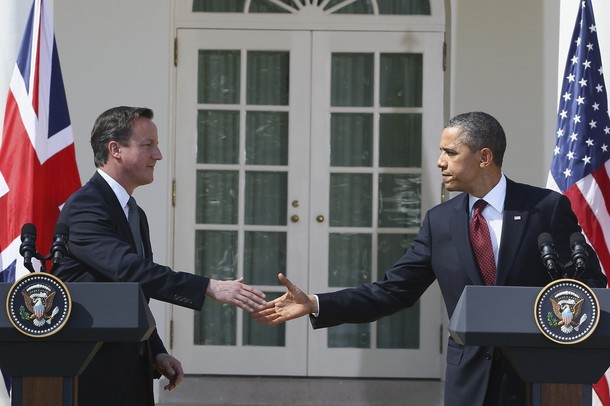 From the White House:  President Obama and Prime Minister Cameron reaffirmed their commitment to continue close cooperation on defense as the United States and United Kingdom build their Armed Forces for the future. The U.S. and UK share an unprecedented defense relationship that has helped secure our shared interests and values since the World Wars of the last century.  We have developed unparalleled military interoperability and interconnectedness, working together to meet the challenges of the Cold War, leading in NATO, and fighting side-by-side in defense of global interests. At every level of our defense establishments British and American service men and women train together, learn together, develop capability together and, when called upon, fight together.  . . .

British and American forces routinely operate side-by-side across a wide range of operations. A century of shared battlefield experience has led to a level of interoperability and familiarity that is unique in its breadth.  This is exemplified in Afghanistan today where the U.S. and UK are the two largest contributors to ISAF, and our Armed Forces are working together to degrade the insurgency and to train and mentor the Afghan Forces to provide security in Afghanistan.  For example, in Helmand province the U.S. Marines’ Task Force Leatherneck and the UK-led Task Force Helmand are working together to deliver stability.

British and American exchange personnel routinely deploy on operations with their host units.  For example, British air transport pilots flew with the U.S Air Force in Haiti earthquake relief operations, and British F-18 pilots are currently flying operational missions from the USS Stennis. U.S. Marine Corp exchange officers have deployed on operational tours to Afghanistan with their host British units, in some cases in a command position, and the U.S. Air Force has a long tradition of exchanging pilots on transport, aerial refueling, and combat aircraft with Royal Air Force units.

The ability of American and British forces to operate on the battlefield effectively is due in large part to the close-knit and constant training and exchange opportunities undertaken together.  As close Allies, the U.S. and UK host each other’s forces in order to conduct training, be prepared to forward-deploy when necessary, and in many cases conduct current operations.  The U.S. currently has over 9,000 personnel permanently stationed in the UK, primarily on shared Royal Air Force (RAF) bases such as RAF Lakenheath and Mildenhall, where U.S. units conduct fighter, transport, and aerial refueling operations.  The Joint Analysis Center (JAC) at RAF Molesworth is a prime example of cooperation, where U.S. and British analysts monitor the world’s trouble spots together.  All four U.S. services send exchange officers to work with the British services, and exchange both junior and senior military officers with British defense schools.

The UK currently stations over 800 British personnel in the U.S., conducting a wide variety of activities from conducting RPAS (Remotely Pilot Air Systems) operations in Afghanistan from Creech AFB, Nevada, to working side by side with American colleagues on major acquisition projects such as the Joint Strike Fighter and C-17 projects, to working with U.S. counterparts on cyber and space cooperation.  Approximately 200 British officers are on exchange with the American services to develop joint approaches to develop capability and increase interoperability.

During the month of March, 2012, alone, 1,100 UK military personnel will take part in 10 training exercises with U.S. forces across the country, to include a detachment from the Royal Regiment of Artillery participating in an adventure training expedition near the Grand Canyon, a squadron of Royal Air Force (RAF) GR4 Tornadoes conducting live-fire heavy weapons training in Arizona, and an RAF squadron participating in a Red Flag exercise at Nellis AFB, Nevada.

The U.S. and UK routinely entrust their best and brightest NCO’s and officers to each other’s academies, military schools, and units to gain experience and insight into the other partner’s way of doing business.  Exchanging military personnel ensures a cadre of individuals in each military that understands their counterparts and cross-fertilizes the best each nation has to offer in ideas and doctrine.  Also during March a senior British officer, Gen Richard Shirreff, will conduct a speaking tour at West Point, Ft. Leavenworth, and the Pentagon as part of the yearly Kermit Roosevelt Speaking seminar, a tradition between the British and American Armies that dates back to 1948.  U.S. General Robert Cone is reciprocating later in the year at the British Ministry of Defence, the Land Forces headquarters, and the Royal Military Academy at Sandhurst.

Today the UK also has a wide range of senior personnel serving in advisory or command positions in U.S. Headquarters, including the Deputy Commander of the 1st Infantry Division, senior planning staff at CENTCOM, and senior liaison positions in NORTHCOM, CENTCOM, CYBERCOM, PACOM and STRATCOM.  British officers also serve as faculty at West Point and the Naval War College.  Similarly, U.S. officers serve with the British military in multiple advisory levels, attend British defense schools, and are integrated into British combat units, sometimes in command positions.