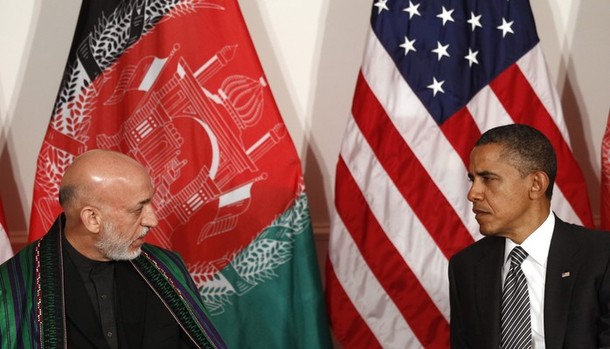 From the White House:  President Obama called President Karzai early this morning to offer his best wishes and congratulations to President Karzai and his wife on the birth of their daughter. The two leaders took the opportunity to reaffirm our shared commitment to the Lisbon framework, in which Afghan forces would complete the process of transition and have full responsibility for security across the country by the end of 2014. The two leaders also affirmed that they share the goal of building capable Afghan security forces and strengthening Afghan sovereignty so that Afghans are increasingly in charge of their own security, with the lead for combat operations shifting to Afghan forces, with U.S. forces in support, in 2013. To that end, the two leaders also discussed President Karzai’s recent reiteration of his longstanding concerns regarding night raids and house searches and recommitted to conclude ongoing negotiations on a Memorandum of Understanding to resolve those concerns.  They also agreed to further discuss concerns voiced by President Karzai about the presence of foreign troops in Afghan villages.  President Obama reiterated that he looks forward to welcoming President Karzai to the NATO Summit in Chicago in May, where they, along with our NATO Allies and ISAF partners, will together define the next phase of transition. The President and President Karzai agreed to stay in close touch.

Readout of the President’s Call to President Karzai.  (photo: Reuters)