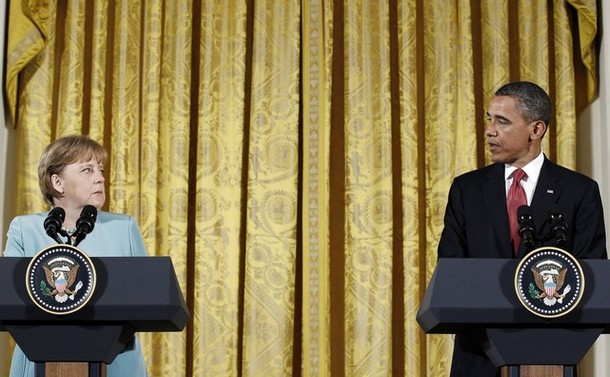 From the White House:  Excerpts from remarks by President Obama and Chancellor Merkel in a Joint Press Conference

Q:  Mr. President, you called Chancellor Merkel one of your closest global allies, but you have differed in approach on a couple of key issues — Libya and the global economic recovery over the years.  In Libya, do you believe more German military involvement in that operation would bring it to a faster, more decisive conclusion?  And did you ask Chancellor Merkel for such a commitment? . . .

Chancellor Merkel, if I could ask you, do you believe NATO was mistaken in getting involved militarily in Libya?  And if not, why are you not more directly involved militarily there?  And what more can you do to promote an accelerated European economic recovery?  Thank you.

PRESIDENT OBAMA:  Well, first of all, with respect to Libya, I think it is important to note that this is a NATO operation that’s fully integrated, which means you have German personnel who are involved actively in these activities in their NATO role.  As I indicated before, Germany has stepped up and taken additional responsibilities in Afghanistan that have freed up resources for us to be able to conduct our operations in Libya.

Chancellor Merkel and I share the belief that Qaddafi needs to step down for the sake of his own people. . . .

Germany — we did discuss last night Germany’s role, and there is going to be a lot of work to do when Qaddafi does step down, in terms of getting the Libyan people back on their feet — economic, political work that’s going to have to be done.  And my expectation is going to be that there will be full and robust German support as there has been in the past from Germany on a wide range of issues. . . .

CHANCELLOR MERKEL:  As regards Libya, the United Nations resolution is apply — still applies.  Qaddafi needs to step down and he will step down.  I’m convinced of that, because we have made great progress.  And then there will still be a lot of work to do.  And in the future when we have the talks on this, we agree that Germany is showing — will be showing that it is responsible and committed to the Libyan cause.  There will be a lot of problems still to contend with, and we’ll be in the closest possible contact.

We support — Germany supports the NATO operation simply by being present in the stance there, and also by stepping up our commitment in Afghanistan.  It is our joint will that this NATO mission is successful.  And this is important for the people in Libya, but it’s also important for NATO, for the alliance at large.  And here we have one heart of allies that beats with the other allies.

Q (As translated):  The German decision on Libya has burdened the German-American relationship somewhat.  Were you surprised by these irritations and this warm reception?  Is this something like a reset button or a breaking up out into a new future?  And you, President Obama, were in Buchenwald and Baden-Baden, but as a new President not in Berlin.  Why not?  And will this happen once you have your new term of office?

CHANCELLOR MERKEL:  Well, I believe that this present event here today after all has been agreed for a long time, and our partnership, our friendship rests on a very broad basis, as I said this morning.  And sometimes there may be differences of opinion in such a friendship and partnership.

What’s important is that we wish each other every success.  Not each and everyone can be in on missions.  For example, we participated in UNIFIL where the United States are not participating.

Without sort of mixing up things here, there will be areas in the world where we shoulder different responsibilities.  Partners are doing together with others things that we believe can be useful.  And this is what we want to do.  We want to see to it that our contribution is bringing about a success, is encouraging other people to now see we wish to live in a democracy, this is good, this is sensible.

So I see today’s event as a wonderful reception, but it’s not something that’s so unusual.  I see it in a continuity of our very close relations, and I do see it as another starting point, if you like, for meeting other challenges of the future.

On the question of Germany, you said that the American President some people say in Germany has not really been to Germany at all.  He was in Dresden, he was in Buchenwald, he was in Baden-Baden for the NATO conference.  Berlin opens its arms to him every day.  But the Berliners can also wait.  They have proved this throughout their history.