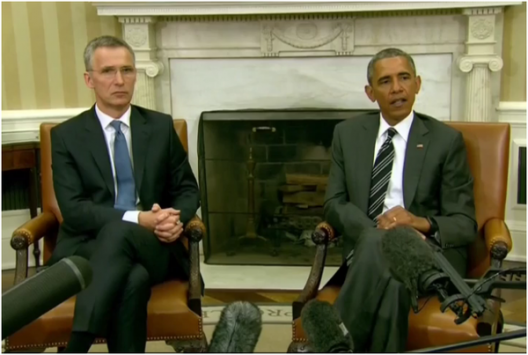 President Barack Obama:  this is a challenging and important time for NATO, and we are very lucky to have General Secretary Stoltenberg at the helm during this time. We had a chance to discuss the situation in Ukraine and the increasingly aggressive posture that Russia has taken, and we affirmed that NATO is the cornerstone not just of transatlantic security but, in many ways, is the cornerstone for global security.

In Wales, we were able to not only affirm the intentions of the Alliance to uphold its Article 5 obligations, but we also put in place a whole host of measures to reassure frontline states and to put in place what we call the Readiness Action plan. That is currently being implemented, and I was pleased to hear that not only the United States but our other NATO allies have been doing what’s necessary to make sure that we have positioned the resources and assets necessary to protect all NATO members.

We also reaffirmed the importance of implementing the Minsk Agreement and ensuring that Ukraine is able to enjoy the same territorial integrity and sovereignty as any other country. And we’ll continue to support Ukraine through the NATO-Ukraine partnership that pre-dates the crisis that occurred both in Crimea and now in eastern Ukraine.

We also had an opportunity to discuss the fact that NATO is involved not just in the fault line of East and West that has traditionally been NATO’s concern; NATO is necessarily recognizing a whole range of global challenges, particularly on what we call the Southern Front. And we are working closely with NATO allies to make sure that we are partnering with other countries to address issues of counterterrorism; making sure that we continue to coordinate effectively in the fight against ISIL — because all 28 NATO members are members of the coalition to support the Iraqi government against the ISIL fight; to address the challenges that exist in Libya — right across from the Mediterranean, and obviously there’s great concern among a number of NATO members about the spillover effects of a chaotic situation there.

That means increased defense capacity-building with other countries like Iraq or GCC countries that are interested in working with us, as well as the African Union. It also means that we have to think about whether we are deploying and arranging our assets effectively to meet that goal….

Secretary General Jens Stoltenberg:  I would like to start to thank you for everything that you personally have done to show leadership in a time where we really need U.S. leadership, and also the initiative you took — the European Reassurance Initiative — which you launched a year ago and which has been of great importance when it comes to U.S. presence in Europe. And the U.S. military presence in Europe is the key to provide reassurance to all allies.

And I have traveled around the Alliance, and all the places I have gone I have met U.S. servicemen and women. And the message they send is the same — that America stands with Europe, Europe and America stand together, and NATO will defend and protect all allies against enemy threat….

The main topic I raise in all capitals always is the importance of delivering on the defense investment pledge we made to stop the cuts in defense budgets and to start, gradually to increase and to aim at 2 percent.

The U.S. is already well above that, so this is something which is about all the allies. And I spend a lot of time urging them to increase their defense budgets because we need more resources to be able to deliver what we already promised both when it comes to collective defense and when it comes to cooperative security.