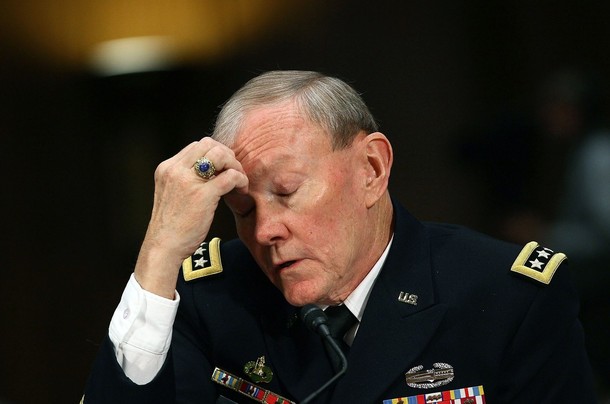 From Elisabeth Bumiller, the New York Times:  One senior defense official said over the weekend that even creating “safe havens,” or protected areas inside Syria for civilians, would be such a complex operation that military planners were “looking at a serious contingent of U.S. ground troops” to help establish and maintain them, should the United States take such a course of action.

The planning is in response to a request by President Obama for preliminary military options from the Pentagon, even though the administration still believes that diplomatic and economic pressure is the best way to stop the violent repression of Mr. Assad’s government. The options under review include humanitarian airlifts, naval monitoring of Syria and the establishment of a no-fly zone, among other possibilities.

Last week General [Martin] Dempsey and Defense Secretary Leon E. Panetta said the military was only in the earliest stages of considering the possibilities. Modern commanders in chief have routinely asked for military contingency plans during crises overseas. . . .

“We’ve been sucked into this open-ended arrangement before, and we’re not going there again,” a senior military official said, speaking of Libya, which required extensive American air power — as well as hundreds of cruise missiles fired from American ships and submarines — to take out Libya’s air defenses so that European warplanes could operate freely. Even then, the United States continued to supply ammunition and refueling planes and fly combat missions.

Defense and intelligence officials say that Syria’s integrated air defenses — a combination of thousands of surface-to-air missiles, radars and antiaircraft guns — are not only more advanced than those in Libya, they are also arrayed in densely populated areas on the country’s western border, meaning that even with precision bombing, civilians nearby would probably be killed.

“There would be some severe collateral damage going after those areas,” Mr. Panetta said last week. . . .

A major concern of the Pentagon is Iran, Syria’s most important ally. Military and intelligence officials say that Iran has recently flown into Syria small arms, chiefly rocket-propelled grenades, as well as technological equipment and high-ranking experts to assist the Assad government in interrupting social media communications and the internet.

“They’re providing listening capability, eavesdropping capability to try and pick up where the opposition networks are at, and they’re providing experts who I can only say are experts in oppressing,” Gen. James N. Mattis, the head of the American military’s Central Command, said in a Senate hearing last week. . . .

Administration officials say that they remain concerned about Syria’s chemical and biological weapons, believed to be among the largest stockpiles in the world, and that they are in discussions with allies in the region about how to secure them.

“I’m not saying it’s a fait accompli that if they’re left unsecured, automatically someone can grab them and use them,” General Mattis said. “They may end up frying themselves. But I think that it’s going to take an international effort when Assad falls, and he will fall, in order to secure these weapons.”  (photo: Getty)