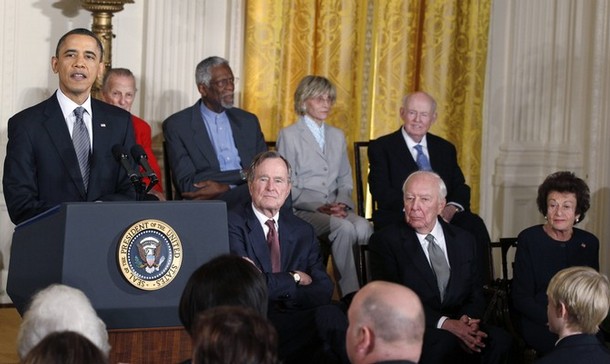 From Barack Obama, the White House:  Growing up in communist East Germany, Angela Merkel dreamed of freedom.  And when the Wall finally crumbled and Germany was reunited, she broke barriers of her own, becoming the first East German — and the first woman — to become chancellor of Germany.

To America, Chancellor Merkel and the country she leads are among our closest allies.  To me, she is a trusted global partner and a friend.  To people around the world, the story of Angela Merkel is an inspiration.  “Everything is possible,” she’s said — something the world has seen again in recent weeks.  “Freedom does not come about of itself.  It must be struggled for, and then defended anew, every day of our lives.”

Chancellor Merkel isn’t here today.  She’ll be visiting me for a visit — an official visit soon, and so I look forward to presenting her the award when she comes.

Excerpt from remarks by the President honoring the Recipients of the 2010 Medal of Freedom.  (photo: Reuters)