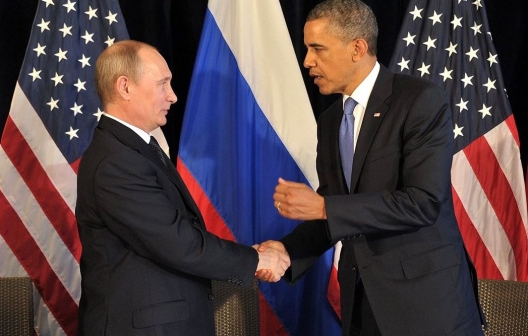 He [President Barack Obama] described a relationship with Putin that doesn’t quite conform to common perceptions. I had been under the impression that Obama viewed [Russian President Vladimir] Putin as nasty, brutish, and short. But, Obama told me, Putin is not particularly nasty.

“The truth is, actually, Putin, in all of our meetings, is scrupulously polite, very frank. Our meetings are very businesslike. He never keeps me waiting two hours like he does a bunch of these other folks.” Obama said that Putin believes his relationship with the U.S. is more important than Americans tend to think. “He’s constantly interested in being seen as our peer and as working with us, because he’s not completely stupid. He understands that Russia’s overall position in the world is significantly diminished. And the fact that he invades Crimea or is trying to prop up Assad doesn’t suddenly make him a player. You don’t see him in any of these meetings out here helping to shape the agenda. For that matter, there’s not a G20 meeting where the Russians set the agenda around any of the issues that are important….”

[W]hat if Putin were threatening to move against, say, Moldova—another vulnerable post-Soviet state? Wouldn’t it be helpful for Putin to believe that Obama might get angry and irrational about that?

“There is no evidence in modern American foreign policy that that’s how people respond. People respond based on what their imperatives are, and if it’s really important to somebody, and it’s not that important to us, they know that, and we know that,” he said. “There are ways to deter, but it requires you to be very clear ahead of time about what is worth going to war for and what is not. Now, if there is somebody in this town that would claim that we would consider going to war with Russia over Crimea and eastern Ukraine, they should speak up and be very clear about it. The idea that talking tough or engaging in some military action that is tangential to that particular area is somehow going to influence the decision making of Russia or China is contrary to all the evidence we have seen over the last 50 years….”

A weak, flailing Russia constitutes a threat as well, though not quite a top-tier threat. “Unlike China, they have demographic problems, economic structural problems, that would require not only vision but a generation to overcome,” Obama said. “The path that Putin is taking is not going to help them overcome those challenges. But in that environment, the temptation to project military force to show greatness is strong, and that’s what Putin’s inclination is. So I don’t underestimate the dangers there….”

Some thought that Putin’s decision to fight on behalf of Assad would prompt Obama to intensify American efforts to help anti-regime rebels. But Obama, at least as of this writing, would not be moved, in part because he believed that it was not his business to stop Russia from making what he thought was a terrible mistake. “They are overextended. They’re bleeding,” he told me. “And their economy has contracted for three years in a row, drastically.”

In recent National Security Council meetings, Obama’s strategy was occasionally referred to as the “Tom Sawyer approach.” Obama’s view was that if Putin wanted to expend his regime’s resources by painting the fence in Syria, the U.S. should let him. By late winter, though, when it appeared that Russia was making advances in its campaign to solidify Assad’s rule, the White House began discussing ways to deepen support for the rebels, though the president’s ambivalence about more-extensive engagement remained.