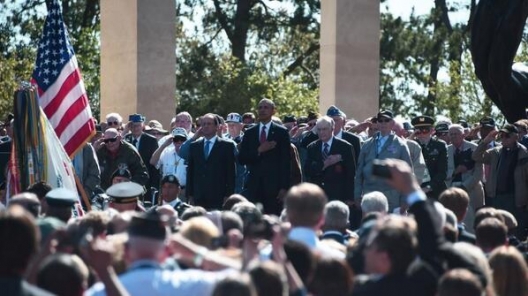 Just last week, I received a letter from a French citizen. “Dear Mr. President and the American people,” he wrote, “we are honored to welcome you to thank you again for all the pain and efforts of the American people and others in our common struggle for freedom.”

Today, we say the same to the people of France: Thank you, especially for the generosity that you’ve shown the Americans who’ve come here over the generations, to these beaches and to this sacred place of rest for 9,387 Americans.

At the end of the war, when our ships set off for America filled with our fallen, tens of thousands of liberated Europeans turned out to say farewell. And they pledged to take care of the more than 60,000 Americans who would remain in cemeteries on this continent. In the words of one man, “We will take care of the fallen as if their tombs were our children’s.” To the people of France, you have kept your word, like the true friends you are. We are forever grateful. . . .

What more powerful manifestation of America’s commitment to human freedom than the sight of wave after wave after wave of young men boarding those boats to liberate people they had never met?

We say it now as if it couldn’t be any other way, but in the annals of history, the world had never seen anything like it. And when the war was won, we claimed no spoils of victory. We helped Europe rebuild. We claimed no land other than the earth where we bury those who gave their lives under our flag and where we station those who still serve under it. . . .

But America’s claim — our commitment — to liberty, our claim to equality, our claim to freedom and to the inherent dignity of every human being, that claim is written in the blood on these beaches, and it will endure for eternity.

Normandy, this was democracy’s beachhead. And our victory in that war decided not just a century, but shaped the security and well- being of all posterity. We worked to turn old adversaries into new allies. We built new prosperity. We stood once more with the people of this continent through a long twilight struggle until finally, a wall tumbled down, and an Iron Curtain, too. From Western Europe to East, from South America to Southeast Asia, 70 years of democratic movements spread. And nations that once knew only the blinders of fear began to taste the blessings of freedom.

Whenever the world makes you cynical, whenever you doubt that courage and goodness is possible, stop and think of these men. Wilson and Harry and Rock, they are here today, and although I know we already gave them a rousing round of applause, along with all our veterans of D-Day, if you can stand, please stand, if not, please raise your hand, let us recognize your service once more. These men waged war so that we might know peace. They sacrificed so that we might be free. They fought in hopes of a day when we’d no longer need to fight. We are grateful to them.

Excerpts from President Barack Obama’s remarks at the 70th anniversary of D-Day, June 6, 2014.