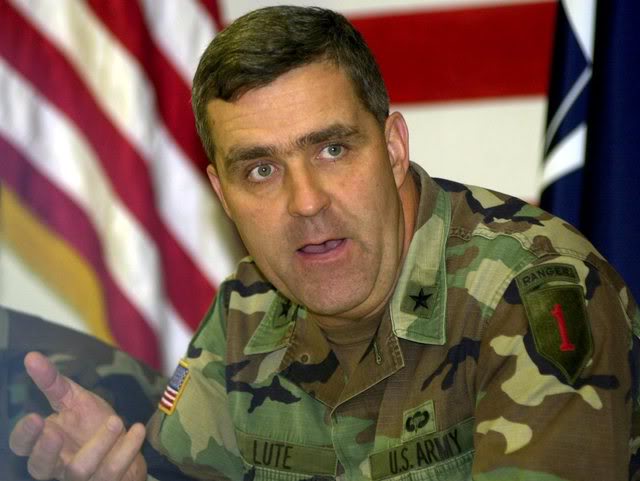 From Gregge Jaffe, the Washington Post:  The Obama administration is considering nominating retired Lt. Gen. Douglas Lute as the next commander of the U.S. European Command, a move that could stir controversy among some senior military officials who have clashed with Lute over war policy.

Lute, who retired from the military in 2010, is currently serving as an unofficial “war czar” coordinating policy on Afghanistan and Pakistan for the Obama administration. He previously served in a similar position under President George W. Bush and has won plaudits from both administrations for his loyalty and his willingness to challenge and prod the Pentagon.

White House officials said that they are not close to a decision on who will replace Adm. James Stavridis, who is scheduled to step down as the top U.S. commander in Europe this summer. . . .

Two Pentagon officials, who spoke on the condition of anonymity to discuss ongoing personnel decisions, said Lute is a top candidate for the job.

The move to bring a general out of retirement for a four-star job would be unusual and somewhat unpopular in the military, where it could be interpreted as a sign that the current crop of active-duty generals are not up to the task.

When Lute first moved to the White House in 2007, it was widely assumed that he would be promoted to a major four-star position. But Lute clashed with then-Defense Secretary Robert M. Gates and Adm. Mike Mullen, then chairman of the Joint Chiefs of Staff, who resisted efforts to promote Lute. Mullen and Gates stepped down from their positions last year, potentially clearing the way for Lute to get a top military job. . . .

Unlike most senior Army generals, Lute has not led U.S. troops in the wars in Iraq and Afghanistan. The position of U.S. European commander is one of the military’s most prestigious commands, but these days is focused as much on diplomacy as traditional military matters.

The next commander in Europe will play a major role in sustaining support for the Afghan war from America’s war-weary NATO allies. Last week, France indicated that it will pull out its combat troops a year early.  (photo: Valdrin Xhemaz/EPA)