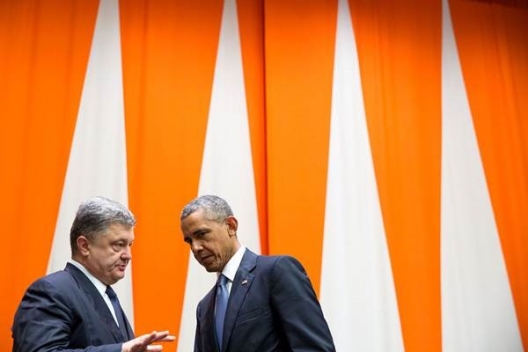 Russia’s invasion of Crimea in early 2014, and its decision to use force to buttress the rule of its client Bashar al-Assad, have been cited by Obama’s critics as proof that the post-red-line world no longer fears America.

So when I talked with the president in the Oval Office in late January, I again raised this question of deterrent credibility. “The argument is made,” I said, “that Vladimir Putin watched you in Syria and thought, He’s too logical, he’s too rational, he’s too into retrenchment. I’m going to push him a little bit further in Ukraine.”

[President Barack] Obama didn’t much like my line of inquiry. “Look, this theory is so easily disposed of that I’m always puzzled by how people make the argument. I don’t think anybody thought that George W. Bush was overly rational or cautious in his use of military force. And as I recall, because apparently nobody in this town does, Putin went into Georgia on Bush’s watch, right smack dab in the middle of us having over 100,000 troops deployed in Iraq.” Obama was referring to Putin’s 2008 invasion of Georgia, a former Soviet republic, which was undertaken for many of the same reasons Putin later invaded Ukraine—to keep an ex–Soviet republic in Russia’s sphere of influence.

“Putin acted in Ukraine in response to a client state that was about to slip out of his grasp. And he improvised in a way to hang on to his control there,” he said. “He’s done the exact same thing in Syria, at enormous cost to the well-being of his own country. And the notion that somehow Russia is in a stronger position now, in Syria or in Ukraine, than they were before they invaded Ukraine or before he had to deploy military forces to Syria is to fundamentally misunderstand the nature of power in foreign affairs or in the world generally. Real power means you can get what you want without having to exert violence. Russia was much more powerful when Ukraine looked like an independent country but was a kleptocracy that he could pull the strings on.”

Obama’s theory here is simple: Ukraine is a core Russian interest but not an American one, so Russia will always be able to maintain escalatory dominance there.

“The fact is that Ukraine, which is a non-nato country, is going to be vulnerable to military domination by Russia no matter what we do,” he said.

I asked Obama whether his position on Ukraine was realistic or fatalistic.

“It’s realistic,” he said. “But this is an example of where we have to be very clear about what our core interests are and what we are willing to go to war for. And at the end of the day, there’s always going to be some ambiguity.”