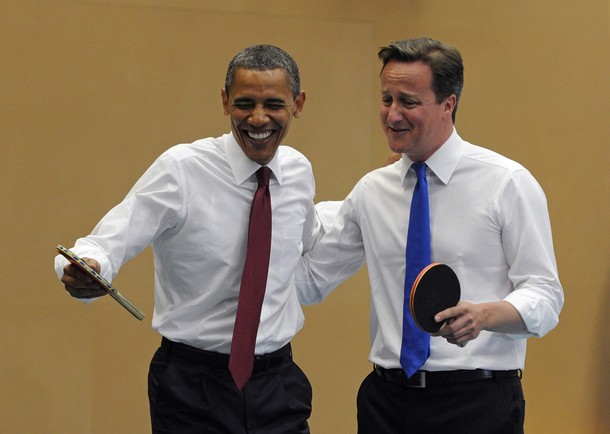 From Ken Thomas, the AP:  Talk about getting the royal treatment: President Barack Obama, an avid basketball fan, is bringing British Prime Minister David Cameron to an NCAA Tournament game in Ohio , showing off one of America’s most popular sporting events.

The White House said Obama and Cameron will attend a first round game in Dayton on Tuesday, part of the official visit to the United States by the British prime minister and his wife, Samantha.

The trip to the NCAA tournament game is intended to underscore the special relationship between the two key allies and will precede a state dinner on Wednesday. Obama and Cameron are expected to discuss the upcoming NATO and G-8 summits along with the Middle East, Iran and the global economy. . . .

The White House has said Obama and Cameron have developed a strong personal bond.  (photo: Reuters)