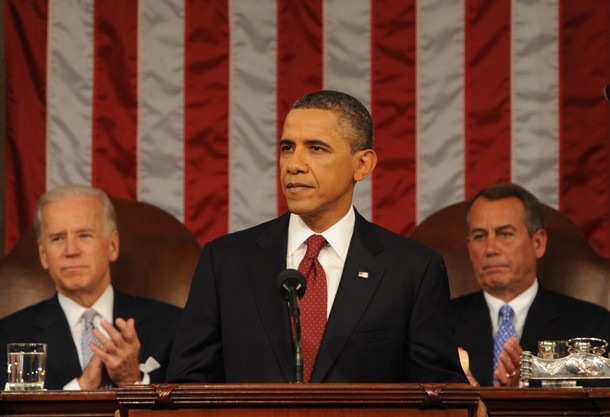 From Barack Obama, the White House:  Ending the Iraq war has allowed us to strike decisive blows against our enemies.  From Pakistan to Yemen, the al Qaeda operatives who remain are scrambling, knowing that they can’t escape the reach of the United States of America.

From this position of strength, we’ve begun to wind down the war in Afghanistan.  Ten thousand of our troops have come home.  Twenty-three thousand more will leave by the end of this summer.  This transition to Afghan lead will continue, and we will build an enduring partnership with Afghanistan, so that it is never again a source of attacks against America.

As the tide of war recedes, a wave of change has washed across the Middle East and North Africa, from Tunis to Cairo; from Sana’a to Tripoli.  A year ago, Qaddafi was one of the world’s longest-serving dictators -– a murderer with American blood on his hands.  Today, he is gone.  And in Syria, I have no doubt that the Assad regime will soon discover that the forces of change cannot be reversed, and that human dignity cannot be denied. . . .

The renewal of American leadership can be felt across the globe.  Our oldest alliances in Europe and Asia are stronger than ever.  Our ties to the Americas are deeper.  Our ironclad commitment — and I mean ironclad — to Israel’s security has meant the closest military cooperation between our two countries in history.

We’ve made it clear that America is a Pacific power, and a new beginning in Burma has lit a new hope.  From the coalitions we’ve built to secure nuclear materials, to the missions we’ve led against hunger and disease; from the blows we’ve dealt to our enemies, to the enduring power of our moral example, America is back.

Excerpts from remarks by the President in State of the Union Address.  (photo: Getty)