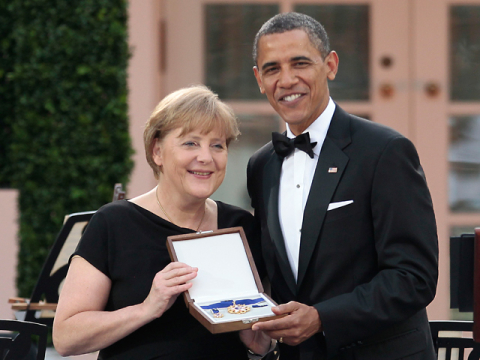 From John Vinocur, the International Herald Tribune:  A funny thing has happened to Barack Obama out there on the campaign trail. The president of the Pacific pivot looks remarkably interested in Europe. . . .

A dissonant theme from the American presidential campaign takes over at this point. It has come in the form of remarks from Obama about “headwinds” from Europe’s financial crisis endangering America’s recovery.

By way of emphasis, he sent the U.S. Treasury secretary, Tim Geithner, to a North Sea island to tell the German finance minister, Wolfgang Schäuble — and then the European Central Bank’s president, Mario Draghi — that Europe has “to do some more things” to push growth “in the near term.” The president’s catchphrase for that is “decisive action.”

• The conservative Frankfurter Allgemeine Zeitung, a leading German newspaper and an Angela Merkel loyalist, responded with rare vehemence, writing that Obama-the-candidate had struck up a “headwinds song” that was “pushy, lecturing, and ignorant.”

•A cabinet-level member of another European government told me, “The administration talks on and on, and you listen, but so what? . . ."

In fact, considerable disregard has developed in relation to the Obama administration’s capacity to persuade, dissuade, or create either serious confidence or discomfort in Europe.

In respect to Germany, there’s not much reason for it to react otherwise.

Berlin knows after four years of experience that it won’t confront anything like “decisive action” from Washington that might make it less comfortable doing what it pleases. Example: The German decision, alongside Russia and China, to abstain from approving U.N. intervention in Libya was followed four months later by Obama’s presentation to Merkel of the Medal of Freedom.  (photo: AP)