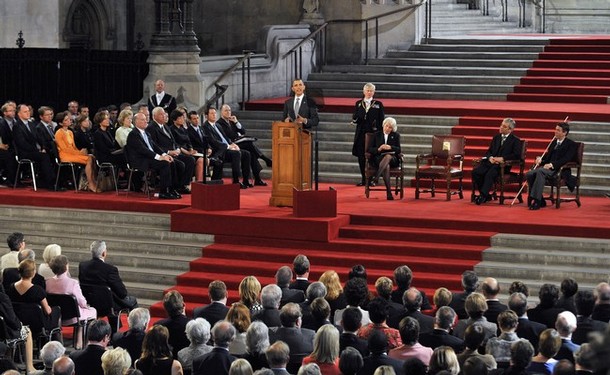 From Barack Obama, the White House:  We are the allies who landed at Omaha and Gold, who sacrificed side by side to free a continent from the march of tyranny, and help prosperity flourish from the ruins of war.   And with the founding of NATO –- a British idea –- we joined a transatlantic alliance that has ensured our security for over half a century.

Together with our allies, we forged a lasting peace from a cold war.  When the Iron Curtain lifted, we expanded our alliance to include the nations of Central and Eastern Europe, and built new bridges to Russia and the former states of the Soviet Union. And when there was strife in the Balkans, we worked together to keep the peace.

Today, after a difficult decade that began with war and ended in recession, our nations have arrived at a pivotal moment once more.  A global economy that once stood on the brink of depression is now stable and recovering.  After years of conflict, the United States has removed 100,000 troops from Iraq, the United Kingdom has removed its forces, and our combat mission there has ended.  In Afghanistan, we’ve broken the Taliban’s momentum and will soon begin a transition to Afghan lead.  And nearly 10 years after 9/11, we have disrupted terrorist networks and dealt al Qaeda a huge blow by killing its leader –- Osama bin Laden. . . .

[A]s this rapid change has taken place, it’s become fashionable in some quarters to question whether the rise of these nations will accompany the decline of American and European influence around the world.  Perhaps, the argument goes, these nations represent the future, and the time for our leadership has passed.

That argument is wrong.  The time for our leadership is now. It was the United States and the United Kingdom and our democratic allies that shaped a world in which new nations could emerge and individuals could thrive.  And even as more nations take on the responsibilities of global leadership, our alliance will remain indispensable to the goal of a century that is more peaceful, more prosperous and more just. . . .

Precisely because we are willing to bear its burden, we know well the cost of war.  And that is why we built an alliance that was strong enough to defend this continent while deterring our enemies.  At its core, NATO is rooted in the simple concept of Article Five:  that no NATO nation will have to fend on its own; that allies will stand by one another, always.  And for six decades, NATO has been the most successful alliance in human history.

Today, we confront a different enemy.  Terrorists have taken the lives of our citizens in New York and in London.  And while al Qaeda seeks a religious war with the West, we must remember that they have killed thousands of Muslims -– men, women and children -– around the globe.  Our nations are not and will never be at war with Islam.  Our fight is focused on defeating al Qaeda and its extremist allies.  In that effort, we will not relent, as Osama bin Laden and his followers have learned.  And as we fight an enemy that respects no law of war, we will continue to hold ourselves to a higher standard -– by living up to the values, the rule of law and due process that we so ardently defend.

For almost a decade, Afghanistan has been a central front of these efforts.  Throughout those years, you, the British people, have been a stalwart ally, along with so many others who fight by our side.

Together, let us pay tribute to all of our men and women who have served and sacrificed over the last several years -– for they are part of an unbroken line of heroes who have borne the heaviest burden for the freedoms that we enjoy.  Because of them, we have broken the Taliban’s momentum.  Because of them, we have built the capacity of Afghan security forces.  And because of them, we are now preparing to turn a corner in Afghanistan by transitioning to Afghan lead.  And during this transition, we will pursue a lasting peace with those who break free of al Qaeda and respect the Afghan constitution and lay down arms.  And we will ensure that Afghanistan is never a safe haven for terror, but is instead a country that is strong, sovereign, and able to stand on its own two feet.

Indeed, our efforts in this young century have led us to a new concept for NATO that will give us the capabilities needed to meet new threats — threats like terrorism and piracy, cyber attacks and ballistic missiles.  But a revitalized NATO will continue to hew to that original vision of its founders, allowing us to rally collective action for the defense of our people, while building upon the broader belief of Roosevelt and Churchill that all nations have both rights and responsibilities, and all nations share a common interest in an international architecture that maintains the peace.