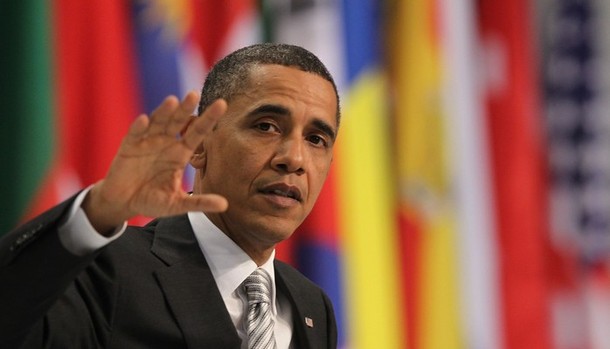 From Barack Obama, the White House:  [T]oday we stand united in Afghanistan, so that terrorists who threaten us all have no safe haven and so that the Afghan people can forge a more hopeful future. …

[W] e aligned our approach on the way forward in Afghanistan, particularly on a transition to full Afghan lead that will begin in early 2011 and will conclude in 2014.

It is important for the American people to remember that Afghanistan is not just an American battle.  We are joined by a NATO-led coalition made up of 48 nations with over 40,000 troops from allied and partner countries.  And we honor the service and sacrifice of every single one.

With the additional resources that we’ve put in place we’re now achieving our objective of breaking the Taliban’s momentum and doing the hard work of training Afghan security forces and assisting the Afghan people.  And I want to thank our allies who committed additional trainers and mentors to support the vital mission of training Afghan forces.  With these commitments I am confident that we can meet our objective.

Here in Lisbon we agreed that early 2011 will mark the beginning of a transition to Afghan responsibility, and we adopted the goal of Afghan forces taking the lead for security across the country by the end of 2014.  This is a goal that President Karzai has put forward.

I’ve made it clear that even as Americans transition and troop reductions will begin in July, we will also forge a long-term partnership with the Afghan people.  And today, NATO has done the same.  So this leaves no doubt that as Afghans stand up and take the lead they will not be standing alone. …

When I went through a rigorous and sometimes painful review process, as you remember, last December, our goal was to make sure that we had blunted the Taliban — the whole point of ramping up our troop presence was not because we wanted to maintain a long-term, large presence in Afghanistan, but it was to immediately blunt the momentum that we were seeing from the Taliban — and to create the space for the training of effective Afghan security forces.

And on both those fronts I think the objective assessment is, is that we have made progress.  You have fewer areas of Afghanistan under Taliban control.  You have the Taliban on the defensive in a number of areas that were their strongholds.  We have met or exceeded our targets in terms of recruitment of Afghan security forces.  And our assessments are that the performance of Afghan security forces has improved significantly.

So, thanks to the hard work of people like Dave Petraeus and Mark Sedwill and others, and obviously the incredible sacrifices of the troops on the ground from the ISAF forces, we are in a better place now than we were a year ago.

As a consequence, I’m confident that we are going to be able to execute our transition starting in July of next year.  And General Petraeus is, in fact, in the process now of planning and mapping out where are those areas where we feel there’s enough security that we can begin thinning out our troops in those areas, where are areas that need further reinforcements as certain areas get thinned out — so that we can continually consolidate the security gains and then backfill it with the effective civilians improvements that are going to be needed.

So we have made progress.  The key is to make sure that we don’t stand still but we keep accelerating that progress, that we build on it.  And the contributions of our coalition forces around trainers is particularly important.  And I’ve already said this, but when countries like Canada — which had originally said they were going to pull out at the end of next year — say, we are willing to supplement the training forces, a very difficult political decision; when countries like Italy are willing to come in and step up on the trainers — that’s a testament to the confidence they have in General Petraeus’s plans, and the fact that we are much more unified and clear about how we’re going to achieve our ultimate end state in Afghanistan.

Excerpts from press conference by President Barack Obama at the NATO Summit in Lisbon.  (photo: Getty)