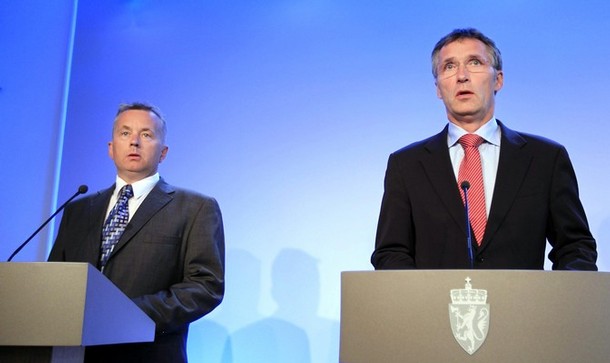 From the AP:  Three suspected al-Qaida members were arrested Thursday morning in what Norwegian and U.S. officials said was a terrorist plot linked to similar plans in New York and England.

The three men, whose names were not released, had been under surveillance for more than a year.

Two of the men were arrested in Norway and one in Germany, according to Janne Kristiansen, head of Norway’s Police Security Service. She declined to give further details of the locations.

Kristiansen said one of the men was a 39-year-old Norwegian of Uighur origin, who had lived in Norway since 1999. The other suspects included a 37-year-old Iraqi and a 31-year-old citizen of Uzbekistan, both of whom have permanent residency permits in Norway.

Officials believe they were planning attacks with portable but powerful bombs like the ones at the heart of last year’s thwarted suicide attack in the New York City subway.

U.S. Attorney General Eric Holder has called that one of the most serious terrorist plots since 9/11. On Wednesday, prosecutors revealed the existence of a related plot in Manchester, England. Officials believe the Norway plan was organized by Salah al-Somali, al-Qaida’s former chief of external operations, the man in charge of plotting attacks worldwide. …

Officials said it was not clear the men had selected a target for the attacks but they were attempting to make peroxide bombs, the powerful homemade explosives that prosecutors say were attempted in both New York and England.  (photo: Getty)