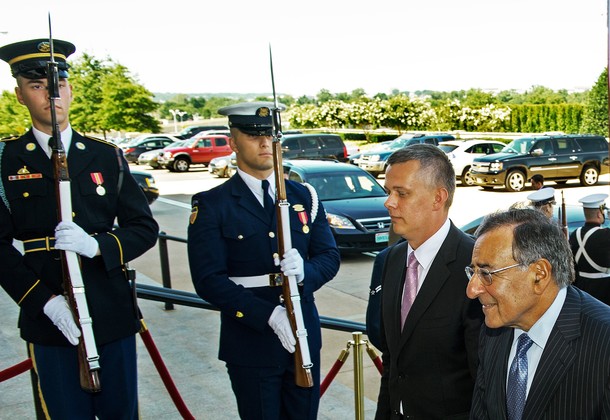 From the Department of Defense:   Secretary Panetta met with Poland’s Minister of National Defense Tomasz Siemoniak to discuss issues of mutual interest, including Afghanistan, NATO missile defense, and the ongoing crisis in Syria.

This is the third in-person meeting between the leaders, the first occurred at the Munich Security Conference in February and the second at the NATO Chicago Summit in May.  Panetta believes the strong defense relationship between Poland and the United States underpins a strategic partnership that helps provide for the security of the North Atlantic community.  Siemoniak expressed full confidence in the United States-Polish friendship and alliance.

Panetta hailed Poland’s contributions to the fight in Afghanistan noting a Polish task force in Ghazni province that has played a critical role in helping improve security in that region.  The secretary also thanked Siemoniak for Poland’s commitment to a continuing presence in Afghanistan including filling requests for Security Force Assistance Teams, which are key to the NATO strategy and the security transition to Afghan National Security Forces.

The leaders also discussed the upcoming assignment of a U.S. Aviation Detachment to Poland.  The detachment will arrive this fall to support quarterly F-16 and C-130 deployments beginning in 2013 and will be the first U.S. forces stationed on Polish soil.  This action represents real progress on the United States commitment to the bilateral Declaration of Strategic Cooperation signed in 2008.  The arrival of this detachment will mark a new step forward in the relationship between United States and Poland and enable closer military cooperation.

Panetta thanked Siemoniak for Poland’s leadership on NATO Ballistic Missile Defense.  Poland was the first nation to establish a BMD agreement with the United States, helping to enable European Phase Adaptive Approach.  The leaders discussed how the recently announced U.S. strategic guidance preserves investments in these kinds of capabilities.  The two nations are working closely together to establish an SM-3 ballistic missile interceptor site in Poland by 2018.

Finally, Panetta congratulated Polish Ambassador to the United States Robert Kupiecki on his recent appointment to Undersecretary of Defense for International Affairs at the Ministry of Defense in Warsaw.  (photo: Getty)