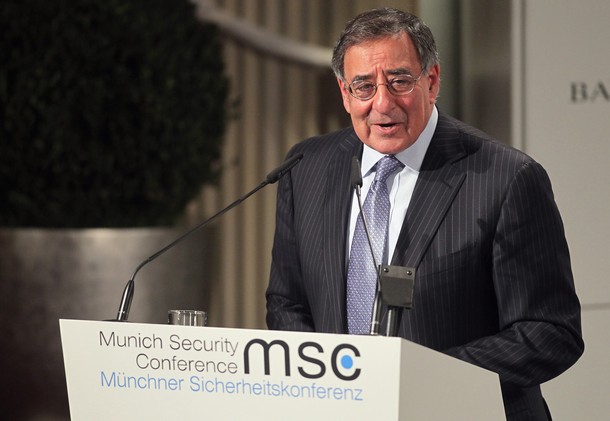 From Leon Panetta, U.S. Department of Defense:  For Europe, the U.S. defense strategy reaffirms the lasting strategic importance of the transatlantic partnership with the United States.  Although it will evolve in light of strategic guidance and the resulting budget decisions, our military footprint in Europe will remain larger than in any other region in the world.  That’s not only because the peace and prosperity of Europe is critically important to the United States, but because Europe remains our security partner, our security partner of choice for military operations and diplomacy around the world.  We saw that in Libya last year and we see it in Afghanistan every day.  . . .

I believe that today’s strategic and fiscal realities offer NATO the opportunity to build the alliance we need for the 21st century, an alliance that serves as the core of an expanding network of partnerships across the globe in support of common security objectives.  But it is an alliance that remains rooted in the strong bonds of transatlantic security cooperation and collective defense.

Let me lay out how we intend to strengthen transatlantic security cooperation by describing what European allies and partners can expect from the United States and our new defense strategy.  First, we will focus on the most pressing security challenges by investing in ballistic missile defense capability for Europe in response to the emerging threats beyond Europe.

As part of the European Phased Adaptive Approach and NATO’s missile defense capability, we have established a radar system in Turkey.  We will be stationing SM-3 missiles in Romania and Poland.  And we will deploy four BMD – ballistic missile defense-capable ships, Aegis ships to Rota, Spain.  President Obama has made clear that the United States is firmly committed to building a missile defense system in Europe.  The new defense strategy and our budget priorities reflect that commitment.

Second, we will invest in shared capabilities that will ensure NATO remains the strongest and most capable military alliance on earth.  To address intelligence surveillance and reconnaissance shortfalls, some of which the Libya operation exposed, NATO has agreed as of yesterday to fund the new Alliance Ground Surveillance system. . . .

Third, we will employ innovative approaches to strengthen security cooperation, even as we reduce the numbers of U.S. troops and dependents that are permanently stationed in Europe.  We will maintain two brigades garrisoned in Europe in addition to moving forward with the missile defense deployments that I’ve already detailed, establishing an aviation detachment in Poland and taking steps to enhance the responsiveness of special operations forces in the region.

As we reduce the end strength of our land forces overall, we will remove two heavy, fixed brigades that are currently garrisoned in Europe – two brigades that, I might point out, have spent most of their time in the war zone and not here.  We selected these legacy brigades for transition because they are the least adaptive to the complex challenges we face and we expect to face alongside our European partners.

We made this decision only after ensuring that our force posture adjustments will not weaken our ability to meet our commitment to the security of Europe or our Article 5 responsibilities.

Today, I can announce that the United States will make a new commitment to the security of our NATO partners by reinvigorating our contribution to the NATO Response Force that we value so much.  The NRF was designed to be an agile, rapidly deployable, multinational force that can respond to crises when and where necessary.  The United States had endorsed the NRF but has not made a tangible contribution due to the demands of the wars – until now.

In the coming months, we will identify a U.S.-based brigade from which we will provide the United States land force contribution to the NATO Response Force, and we will rotate a battalion-sized task-force to Germany for exercises and training.  Not only will this open up new opportunities for U.S. troops to train and exercise with our European counterparts, it will ensure NATO has the capability to conduct expeditionary operations in defense of our common interests.  But to fully realize the goal of a strong and agile NRF, we need the support of other Alliance members.