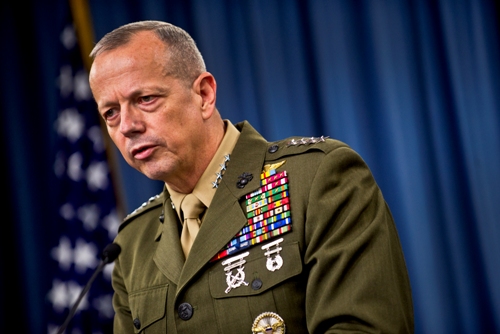 From Phil Stewart, Reuters:  The top U.S. commander in Afghanistan, General John Allen, is under investigation for alleged inappropriate communication with a woman at the center of the scandal involving former CIA Director David Petraeus, a senior U.S. defense official said on Tuesday.

The revelation threatens to fell another of the U.S. military’s biggest names and suggests that the scandal involving Petraeus – a retired four-star general who had Allen’s job in Afghanistan before moving to the CIA last year – could expand.

The U.S. official said the FBI uncovered between 20,000 and 30,000 pages of communications – mostly emails spanning from 2010 to 2012 – between Allen and Jill Kelley, who has been identified as a longtime friend of the Petraeus family and a Tampa, Florida, volunteer social liaison with military families at MacDill Air Force Base.

It was Kelley’s complaints about harassing emails from the woman with whom Petraeus had had an affair, Paula Broadwell, that prompted an FBI investigation that ultimately disclosed Petraeus’ involvement with Broadwell. Petraeus resigned from the CIA post on Friday.

Asked whether there was concern about the disclosure of classified information, the official said, on condition of anonymity: "We are concerned about inappropriate communications. We are not going to speculate as to what is contained in these documents."

Defense Secretary Leon Panetta told reporters flying with him to Australia that he had asked that Allen’s nomination to be Commander of U.S. European Command and Supreme Allied Commander Europe be delayed "and the president has agreed."

President Barack Obama has put the nomination on hold, the White House said on Tuesday.

Allen, who is now in Washington, was due to face a Senate confirmation hearing on Thursday, as was his successor in Afghanistan, General Joseph Dunford.

The U.S. defense official said that Allen denied wrongdoing and that Panetta had opted to keep him in his job while the matter was under review – and until Dunford can be confirmed to replace him, a process that gains urgency given the cloud the scandal could cast over the mission in Afghanistan.

"While the matter is under investigation and before the facts are determined, General Allen will remain commander of ISAF," Panetta said, referring to the NATO—led force in Afghanistan. . . .

Commending Allen’s leadership in Afghanistan, Panetta said: "He is entitled to due process in this matter."

At the same time, he noted that he wanted the Senate to act promptly on Dunford’s nomination.  (photo: Petty Officer 1st Class Chad J. McNeeley/DoD)