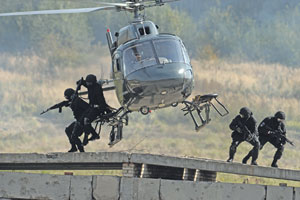 From Flightglobal:  Russia’s defence ministry on 18 September confirmed that it is evaluating five Eurocopter AS355 helicopters for light transport and special mission duties, in the first formal admission that it is testing the French-built type.

The five aircraft were purchased in 2011, although Eurocopter has declined to comment on the purchase.

Confirmation of the deal came after Russian daily Nezavisimaya Gazeta published a photograph on its website apparently showing Russian commandos jumping from an AS355 during an anti-terrorist exercise.

"The parties have reached an agreement to test the helicopters and make a final decision on their purchase after the tests," the source said.

The purpose of these tests is to disprove the decision made by the tender commission that the tactical, technical and flight characteristics of the helicopters put up for tender do not fully meet the Defense Ministry requirements.

"The Defense Ministry plans to buy a total of 47 helicopters. They will be used mainly for transportation of top Defense Ministry officials and commanders of military districts," the source said.  (photo: Nezavisimaya Gazeta)