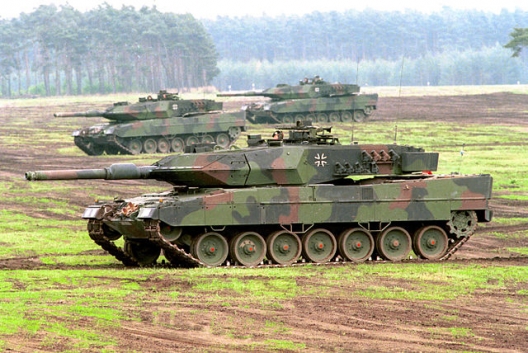 From Jaroslaw Adamowski, Defense News:  The Polish Defense Ministry has acquired 119 tanks from the German Army. These include 105 Leopard 2A5 tanks and 14 2A4 variants, the ministry said in a statement. The contract was signed by Polish Defense Minister Tomasz Siemoniak and his German counterpart, Thomas de Maizière.

“The version which we are acquiring will remain operational for many years to come without the need to be modernized,” Siemoniak said. “We want the Leopard to be the main tank operated by the Polish Army. . . .”

German Defense Minister Thomas de Maiziere, speaking at the contract signing in Poland, noted the Leopard battle tanks were developed during the Cold War as a defense against forces of the Soviet Union and Warsaw Pact, of which Poland was a member. “And now these Leopard battle tanks serve our joint work and connection in NATO,” he said.

From Aviation Week:  The Polish army already has 128 Leopard 2A4s operated over the last 10 years by its 10th Armored Cavalry Brigade.