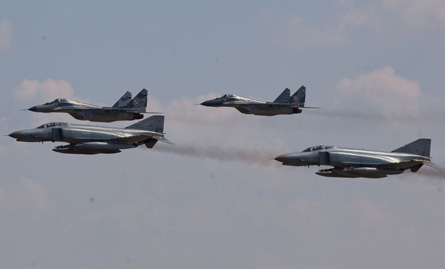 From the AP:  Poland’s air force will continue policing the airspace of three Baltic countries as part of its role in a NATO mission, despite one of them — Lithuania — refusing to attend joint talks, the president said on April 17.

Bronislaw Komorowski spoke at a news conference following two days of talks with Estonian President Toomas Hendrik Ilves and Latvian President Andris Berzins ahead of a NATO summit in Chicago in May.

He said he had signed the declaration extending Poland’s rotating participation in NATO’s Air Policing mission over Lithuania, Latvia and Estonia, none of which has an air force.

"Polish troops will continue to protect the skies over the Baltic states. This is our contribution to the region’s security," he said. Four Polish Air Force MiG-29 fighters continue policing the airspace from April 27 through August.

Lithuanian President Dalia Grybauskaite had declined Komorowski’s invitation to the talks amid a souring of bilateral ties and Warsaw’s pressure for more rights for some 200,000 Poles who live in Lithuania.

To run until 31 September, the Orlik 4 detachment will cost Poland about 6.5 million zlotys ($2 million), the nation’s defence ministry says. Its air force has previously held responsibility for protecting the airspace of Estonia, Latvia and Lithuania during other MiG-29 detachments made in 2006, 2008 and 2010.  (photo: Lithuanian Air Force)