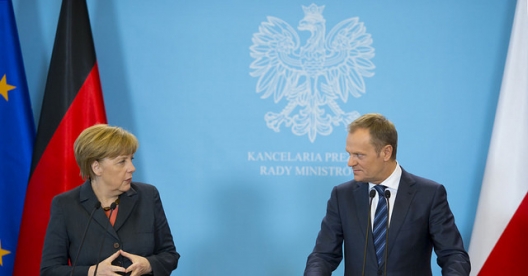 Poland fears that Germany will not make the hard decisions required to stop Russia from acting again.

One such decision, according to Warsaw, would be to have NATO troops permanently deployed in Poland and the Baltic states. Berlin opposes that on the grounds that it would provoke Russia (as if it needed any provoking).

Warsaw also has qualms about the composition of planned roundtable talks on Ukraine’s future. The chairman of the discussions, former German diplomat Wolfgang Ischinger, proposed including pro-Russian militia groups in the talks. Germany is broadly in favor, but Poland fears that this could legitimate the militias’ actions. Overall, Poland sees a Germany that is unwilling to go the long haul with Russia, especially over sanctions.

If that is the case, then Germany’s role in the Ukraine crisis could weaken the EU vis-à-vis Russia, not strengthen it. This would certainly be what Russian President Vladimir Putin is hoping for, and what Poland and the Baltic states fear.

The short-term stability that Germany, other European countries, and the United States yearn for has already proven expensive. The West has tacitly accepted, but not recognized, Russia’s annexation of Crimea. It’s the same with South Ossetia and Abkhazia, which Russia has effectively controlled since a brief war with Georgia in 2008.

What worries the Poles is that if stability in Ukraine returns under terms suitable to the Kremlin, it may only be a matter of time before it is business as usual with Russia. That would give Russia the space to make another move.