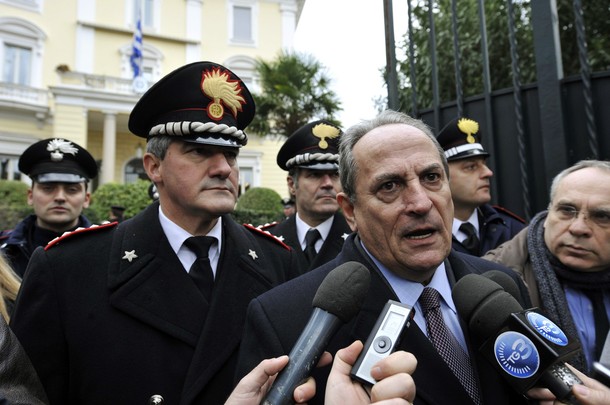 From the AP:  Police on Tuesday confirmed a link between Italian and Greek anarchists, saying the Italian group that sent parcel bombs to three Rome embassies was responding to an appeal from its Greek counterparts to step up attacks.

The Italian "Informal Anarchist Federation," which claimed responsibility for sending mail bombs to the Swiss and Chilean embassies last week, also sent a bomb that was discovered at the Greek Embassy on Monday, Carabinieri Col. Maurizio Mezzavilla told The Associated Press. …

"We’re striking again, and we do so in response to the appeal launched by our Greek companions of the Conspiracy Nuclei of Fire," the Italian group wrote in the claim, according to Mezzavilla.  (photo: Reuters)