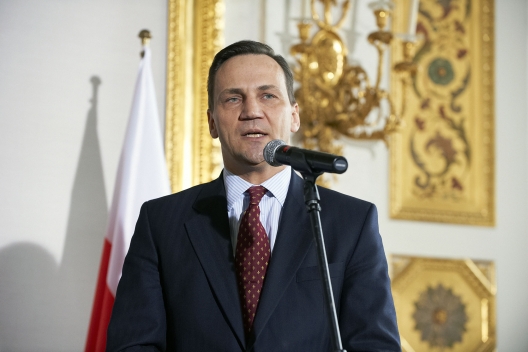 Russia must not be allowed to redraw the map of Europe, Radek Sikorski, Poland’s Foreign Minister, tells the Telegraph ahead of a meeting with William Hague on Monday.

“We cannot let Putin get away with this,” says Radek Sikorski, Poland’s Foreign Minister. His Oxford English is perfect, his tone decisive. “By annexing Crimea, Russia is forcing a major change of boundaries on Europe. It means the breaking of the post-Cold War consensus. That is verboten.”

Vladimir Putin, lacking Mr Sikorski’s linguistic skills, does not understand “verboten”. He has been taunting the west for days now, placing troops on Ukrainian soil to defend — as he puts it — ethnic Russians there from the “nationalist mob” who overthrew President Viktor Yanukovych. The annexation of Crimea, the southernmost region in Ukraine, looks inevitable to Sikorski: “The timetable for the Kremlin’s annexation of the region is accelerating daily.” Putin knows America and the EU are in thrall to Russia’s money, oil and gas. He reckons that with huge economic interests at stake, no one will fight for Ukraine’s sovereignity.

But Putin has underestimated EU unity, says Sikorski. “I’m seeing William Hague on Monday. We are as one on Ukraine. We cannot allow Putin to redraw the map of Europe along ethnic lines. Europe is based on the principle of overcoming borders rather than redrawing them. No one has the unilateral right to move borders in response to presumed ethnic grievances. We’ve seen what happened when a European leader tried to do that before: the peoples of the Soviet Union paid one of the biggest prices for this. . . .”

For Sikorski, however, America “remains crucial.” President Obama has rushed a dozen F16 fighters and 300 troops to Poland in response to Russia’s invasion. “It is when America toughened over Crimea its stance over the invasion that Britain came on board.”

But Britain, he says, still needs to appreciate the “force multiplier that is the EU when it comes to its foreign policy. Whether it is Tehran, Damascus, Kiev or in Moscow, we are much more influential when we speak as representatives of the whole Union rather than as representatives of one country. I hope that even the most ardent Eurosceptic has seen this in the way the crisis has been handled.

“From the start,” he adds, “this crisis was all about Europe. The Ukrainian opposition wanted to join Europe, which to them doesn’t necessarily mean full membership, but rather becoming part of a community which is democratic, free of corruption, less monopolistic, less oligarchical. . . .”

The EU cannot wash its hands of Ukraine now, as Sikorski knows: “Last week in Brussels we decided the association agreement [the treaty which would tie Ukraine closer to Europe] would not be the final goal of the Ukrainian cooperation with the EU.”