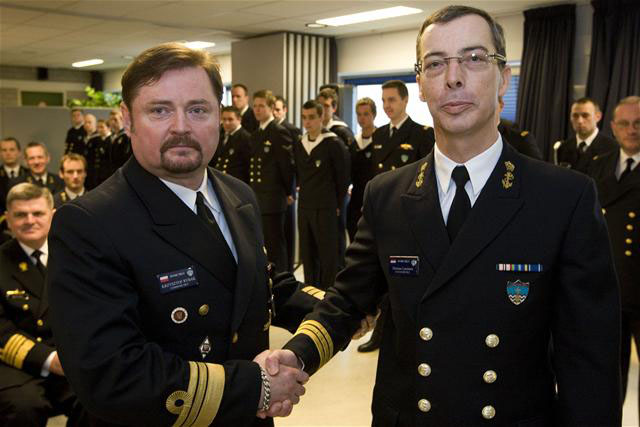 From NATO:  Making history is not something every commander can say when they hand over the rotational lead of one of NATO’s maritime groups. For Commander Krzysztof Jan Rybak, completing a year at the helm of NATO’s Standing Mine Countermeasures Maritime Group 1 (SNMCMG1), meant he was the first ever Pole to lead Alliance ships.

“I would compare the nomination to winning a championship and beating a world record at the same time,” says Cdr. Rybak who has been in the Polish navy some 25 years. “It was a great privilege to command the flagship vessel, the ORP Kontradnmiral Xawer Czernicki, for that rotation.”

The Polish Navy initiated Poland’s involvement in NATO manoeuvres in 1993. Since then, as one of the newer members of NATO (1999), Poland has been participating in various NATO operations and training. . . .

Under Polish direction the SNMCMG1 conducted five historical ordnance disposal operations and seven complex multinational exercises. One of these, Northern Coasts, took place last September and was the biggest peacekeeping exercise of the year in the Baltic Sea with some 60 ships, planes and helicopters involved. In the fictitious scenario, international naval forces responded to a UN Security Council Resolution to avert local conflict around the Gulf of Bothnia. . . .

“To be the Commander of SNMCMG1 means that you are one of the key players in the NATO command structure, and you are responsible for the NATO image,” he explains, adding that awareness of his role’s importance made the separation from his family easier. “It is a huge responsibility, and full of great satisfaction, but at the same time it means you have to be constantly ready for a change of situation. . . .”

The group has also been tasked following the recent unrest in Libya, to patrol the waters of the southern Mediterranean instead of disposing of historical ordnance around Italy. SNMCMG1 arrived in the area on March 18. Since the start of Operation Unified Protector, two of the group’s ships have been assigned to the operational command.  (photo: NATO)