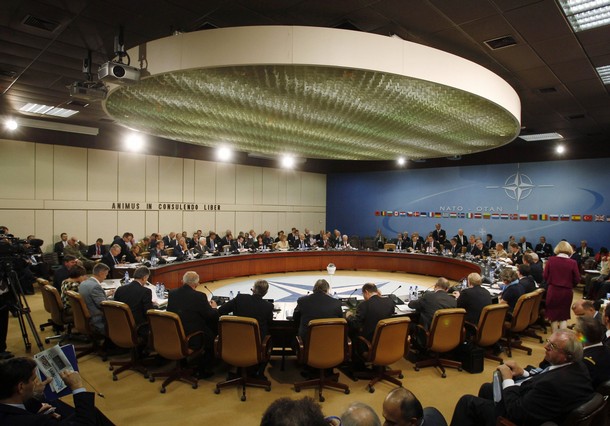 From Con Coughling, the Wall Street Journal:  Many European powers, such as Germany, insist the NATO mission should be confined to the humanitarian objectives set out in U.N. resolution 1973, namely to protect innocent civilians and establish a cease-fire. But their position is at odds with Britain, France and the U.S., which have publicly declared that the military campaign must continue until Gadhafi is removed from power, an objective that is not included in the original U.N. mandate.

This glaring disconnect between those who back humanitarian intervention and those who seek regime change has had a significant impact on NATO’s military response, with only a handful of nations prepared to commit their forces to conduct combat operations against the Libya.

In addition, NATO’s capacity to wage an effective military campaign has been significantly weakened by President Barack Obama’s decision to withdraw U.S. warplanes from combat operations after the opening air sorties in March succeeded in knocking out Gadhafi’s air-defense systems.

This means that the bulk of the combat sorties flown against Libya are being undertaken by a handful of countries that Donald Rumsfeld, the former U.S. Defense Secretary, might describe as a "coalition of the willing." And while countries such as Norway, Denmark, Sweden, Belgium, Holland, Qatar and Jordan have made useful contributions to NATO’s combat operations, the lion’s share of the bombing missions are being carried out by Britain and France, which between them have flown around 75% of the total sorties launched since March.

The heavy reliance on British and French warplanes raises problems of its own. The operational effectiveness of Britain’s Royal Air Force has been undermined by the government’s recent decision to impose severe cuts on the defence budget, which has severely reduced the number of aircraft available for operations in Libya.

The deep divisions among key member states is also having a harmful effect on the way NATO commands the Libyan operation. NATO’s command structure is highly bureaucratic at the best of times, with every member nation allowed a say in how the alliance prosecutes a military campaign, even those that have refused to participate. Consequently whenever NATO officers in Naples identify a potential bombing target, it must first be referred to one of the three "targeting boards" that convenes three time each day to assess the next stage of the bombing offensive.

This allows countries that are not even participating in the combat sorties to voice their objections in the form of a "red card" if they believe a potential target falls outside the scope of the U.N. resolution. Thus any mission that was deemed to be targeting Col. Gadhafi directly will be ruled out on the grounds that it does not have U.N. backing.