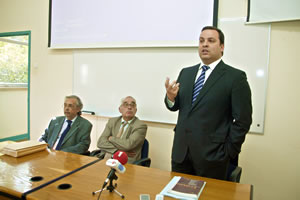 From Barry Hatton, the AP:  Portugal’s spy chief resigned on the eve of a NATO summit in Lisbon, but the country’s defense minister said Thursday this will not affect the security of the leaders from the military alliance’s 28 member nations , including President Barack Obama.

Local media reported that Silva Carvalho was angered by cuts in defense spending amid a financial crisis caused in part by Portugal’s high debt burden.

The resignation "will have no effect at all on security matters in any area, neither in domestic security nor in intelligence procedures," Santos Silva said.

He said the intelligence service would remain fully operational and that Silva Carvalho would remain in his job until a replacement takes office next month.  (photo: Segurança e Defesa)