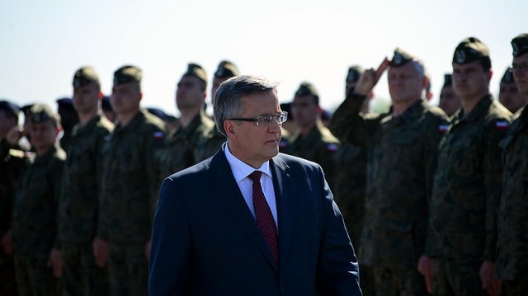 I also wish to stress that it is our common concern that, at the Wales summit, of NATO to reconfirm the need for the greater engagement of NATO in the development of infrastructure that would facilitate the reception of the reinforcement forces in case of threat.

I also fully appreciate that we are of the same opinion as far as the need of the update and the continuous exercises of the armed forces from the perspective of the contingency plans is concerned. I also would like to stress that we are also of absolutely the same opinion about the necessity to increase our financial efforts to fund armed forces by the member states of NATO. . . .

Certainly, for us, the decisions of the American authorities to increase its presence in the Eastern countries of NATO are very important. We welcome them with great hope. And we welcome these decisions as an announcement of a true return of NATO to focusing very strongly on questions that are connected at the foundations of the alliance, which is Article 5 of the Washington Treaty that refers to the collective defense — the defense on the basis of solidarity of the territories, the homelands of the member states.

We are absolutely convinced that this is a good response and it is important for the whole region, not only for Poland. It is an important response that will be analyzed and evaluated as a very important element of discouragement for Russia to continue the policy of pressure and aggression against the neighbors that are located to the east of our borders.

However, I am absolutely convinced that another element that is so important that also supplements the will that is expressed by President Obama to increase the presence of the American armed forces in Eastern Europe will be the engagement of NATO in the development of additional NATO infrastructure that is a prerequisite for the possible effective reception of the reinforcement forces. These two elements in my opinion create a situation of full reconfirmation — reaffirmation of the security of our region. And for this I would like to thank you. . . .

For Poland, what is really fundamental is to make sure that nobody from outside of NATO claims the right to determine what NATO member states may do and what they may not do. And it also concerns the question of the presence of NATO troops and NATO infrastructure in the Polish territory.

What is most important for us is to make sure that there are no second-category member states of NATO, that there are no countries about whom an external country, a third country like Russia can say whether or not American or other allied troops can be deployed to these countries. That is why the decision of the United States of America to deploy American troops to Poland is really very important for us, both as an element of deterrence, but also as a reconfirmation that we do not really accept any limitations concerning the deployment of NATO troops to Poland imposed for some time or suggested for some time by a country that is not a member of NATO.

Another thing is the inadequacy of response for the existing situation, the Ukrainian crisis, the Russian behavior about Crimea, for example — first, the necessary response to it. And this response is both the real presence of American troops, reinforced aviation detachment and then the ground troops that that would complement, as well as the declaration of President Obama to increase this presence even more. I would like to remind you that Poland is also making a contribution in the reconfirmation of an equal right of every member state to decide whether or not they are going to receive NATO troops in their territories.

Poland is participating in the air policing mission that is a mission to provide security for the air space over the Baltic States. We do this together with other allies from NATO and we don’t ask anybody for acceptance except for what is agreed within NATO internally. The same goes for Poland’s participation in the Afghan operation in ISAF. It was the reconfirmation of full solidarity and full core responsibility for the decisions which are made not only for the military effort but also for political decisions. Poland has been and shall continue to be a spokescountry for the solidarity within NATO. And this can be manifested also in the denial of the right of anyone from outside of NATO to decide whether we can do something or we cannot do it.

[I]t is difficult not to notice that something has changed to the east of the borders of NATO; that, again, we are heading toward the aggression with the use of armed forces against one’s neighbor. A few years ago it was Georgia; now it is Ukraine, with a special focus on Crimea.

President Putin didn’t hide — he didn’t hide that these were elements of the Russian armed forces, and this is something that we have to acknowledge — just the same way Russia never hid that for the last four years it has increased its defense budget twofold. We, ourselves, have to ask the question, why? For what purpose? And what does it have to mean for member states of NATO?

Excerpt from remarks by President Barack Obama and President Bronislaw Komorowski of Poland in a joint press conference, June 3, 2014.