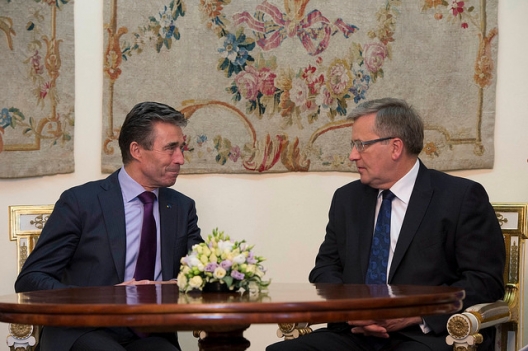 The Ukrainian-Russian conflict is the biggest challenge for European security since the time of the Cold War, according to President Bronislaw Komorowski. The Polish president is in favour of strengthening NATO’s eastern flank.

Opening a meeting of the presidents of nine Central and Eastern European NATO member states in Warsaw on Tuesday, President Komorowski described the current conflict between Russia and Ukraine as “the most important challenge for Europe’s security since the Cold War ended.”

Referring to last week’s shoot-down of a Malaysian jetliner over eastern Ukraine, Komorowski called it a “particularly dramatic” expression of the Ukrainian-Russian conflict.

“To an even greater extent than earlier events, this tragedy should mobilise us to seek solutions strengthening the security of NATO’s eastern countries and to seek security that is important to all the NATO members,” the Polish president said.

According to Komorowski, Russia’s actions against Ukraine – the annexation of Crimea and support provided to separatists – “break the fundamental rules on which the international security architecture is founded.”

“Not only the survival of a sovereign and democratic Ukraine is at stake in this conflict, but also the credibility of the European order based on respect for territorial integrity and not using force or threatening to use it in international relations,” the president believes.

NATO countries should consistently uphold their support for Ukraine, its integrity and its reforms, Bronislaw Komorowski added.

“NATO should return to effectively ensuring the possibility of collective defence for its members,” the president also said, remarking that it was essential to strengthen NATO’s eastern border. “We all feel this and say it,” he added.

“We cannot agree to allies being divided into different categories (…), because security is indivisible,” Komorowski emphasised.

The elements that will strengthen eastern NATO countries, according to the president, include the presence of NATO forces in this part of Europe, expanded allied infrastructure, updated contingency plans and military exercises.

“NATO must remain sovereign and its decisions related to its members’ sense of security cannot be dictated by third countries,” argued president Komorowski.

He believes that by undertaking individual measures to strengthen their own security, Central and Eastern European countries can serve as an example for other NATO members and the alliance as a whole. Defence spending in NATO countries is dropping, Komorowski noted, “in a situation when Russia, which today is part of a huge problem of conflict and aggression, increased its armed forces spending by 100 percent over the past four years.”

Though it will be hard for many NATO countries to maintain defence spending at 2 percent of GDP, “our role is to set a good example, to provide arguments encouraging appropriate decisions on maintaining spending by NATO as a whole,” the president said.

He pointed out that Poland and Estonia already assigned close to 2 percent of GDP to defence spending while decisions to increase spending were being made in Lithuania, Latvia and Romania.

Referring to his Monday telephone conversation with U.S. President Barack Obama, President Komorowski said that “the U.S. president shows a strong interest and the will to support many of our suggestions regarding NATO’s eastern flank.”

Obama is also “definitely a supporter of a strong response to the security crisis in Europe caused by Russia’s aggression against Ukraine,” Bronislaw Komorowski added.