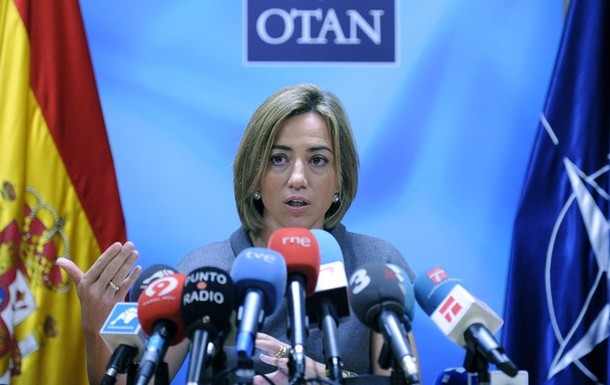 From Slobodan Lekic, the AP:  Before the North Atlantic Council meeting began Friday afternoon, Spain said it will propose that NATO deploy radar-equipped surveillance aircraft known as known as AWACS off Libya’s coast to monitor the situation.

Defense Minister Carme Chacon told reporters in Madrid that the goal would be "to know what is happening in the country." She said Spain also will suggest that NATO deploy its ships off the North African country’s coast.

NATO already has a naval force in the Mediterranean Sea, known as Active Endeavor, that monitors shipping to protect it from terrorist activity. …

NATO envoys in Brussels said they did not expect to discuss the possibility of imposing a no-fly zone over Libya. Any such action – intended to prevent attacks by government jets and helicopter gunships against pro-democracy protesters – would have to be sanctioned by the U.N. Security Council, they said.

But French diplomats appeared skeptical about the need to convene the emergency North Atlantic Council.

"France, which with the British has already called for a meeting of the U.N. Security Council, does not see the need … for a NATO meeting about Libya," French Foreign Ministry spokesman Bernard Valero told reporters. "There are still a lot of foreign citizens there. Therefore we must be careful."  (photo: Getty)