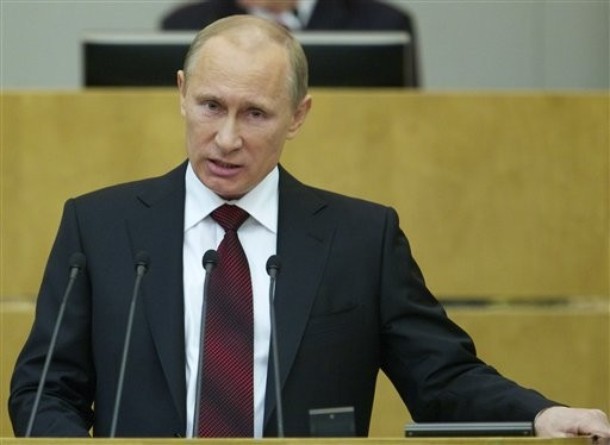 "I think that NATO as a whole — and I say this directly to our colleagues — is a relic of the Cold War era," Putin said to a round of applause from lawmakers who were present for his annual address to parliament.

But Putin then quickly added that NATO on occasion plays a "stabilizing" role in world affairs and particularly raised the example of Afghanistan.

"We understand what is happening in Afghanistan — right? We are interested in things there being under control. Right? And we do not want our soldiers to fight on the Tajik-Afghan border," he said in reference to Moscow’s Soviet-era involvement in Afghanistan.

"Well, NATO and the Western community is present there. God give them good health. Let them work," Putin said.

From the AP:  Putin said that while Russia sees the alliance as a Cold War relic and has been critical of some of its actions, it views NATO’s efforts in Afghanistan as crucial for its own security interests, helping prevent instability from spreading into ex-Soviet Central Asia.

“We are interested in the situation there remaining under control, and we don’t want our troops to fight on Afghanistan’s border with Tajikistan,” Putin said. “We need to help them stabilize the situation in Afghanistan, or we will have to do it ourselves.”   (photo: AP)