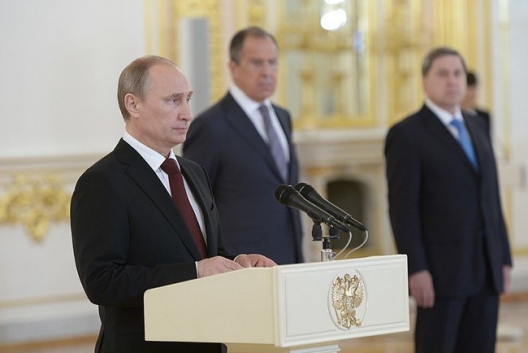 From  David M. Herszenhorn, New York Times: The simmering standoff in eastern Ukraine exploded into warfare early Tuesday, pushing the conflict to a dangerous new phase and prompting President Vladimir V. Putin of Russia to warn again that he reserves the right to use force to defend Russian-speaking citizens.

Government forces unleashed ground assaults and air bombardments throughout the region, including heavy artillery shelling around the rebel-controlled city of Slovyansk and pitched battles for control of administrative buildings in Donetsk. The attacks began shortly after President Petro O. Poroshenko declared an end to a 10-day cease-fire and ordered government forces to renew their effort to quash a pro-Russian separatist insurrection in the east.

The recharged government offensive followed two days of conference calls with the leaders of Russia, France and Germany that failed to yield concrete steps toward a peace agreement, and came as Mr. Poroshenko accused Mr. Putin of talking about peace while arming and encouraging the separatists.

Ukraine has been in turmoil since December, when its former president, Viktor F. Yanukovych, spurned a trade deal with the European Union in favor of a $15 billion loan and other concessions from Russia. Mr. Yanukovych was driven from office in the ensuing demonstrations, and after Mr. Putin seized Crimea in March the separatist rebellion began brewing in the east, which has historically close ties with Russia.

While President Obama and European leaders have joined Ukraine in accusing Moscow of creating and sustaining the rebellion in eastern Ukraine, Mr. Putin blamed the West for the troubles there and talked broadly about protecting Russians outside the country’s borders.

“I would like to make it clear to all: This country will continue to actively defend the rights of Russians, our compatriots abroad, using the entire range of available means — from political and economic to operations under international humanitarian law and the right of self-defense,” Mr. Putin said.

From Vladimir Putin, Office of the President of Russia:  In Ukraine, as you may have seen, at threat were our compatriots, Russian people and people of other nationalities, their language, history, culture and legal rights, guaranteed, by the way, by European conventions. When I speak of Russians and Russian-speaking citizens I am referring to those people who consider themselves part of the broad Russian community, they may not necessarily be ethnic Russians, but they consider themselves Russian people.

What did our partners expect from us as the developments in Ukraine unfolded? We clearly had no right to abandon the residents of Crimea and Sevastopol to the mercy of nationalist and radical militants; we could not allow our access to the Black Sea to be significantly limited; we could not allow NATO forces to eventually come to the land of Crimea and Sevastopol, the land of Russian military glory, and cardinally change the balance of forces in the Black Sea area. This would mean giving up practically everything that Russia had fought for since the times of Peter the Great, or maybe even earlier – historians should know.