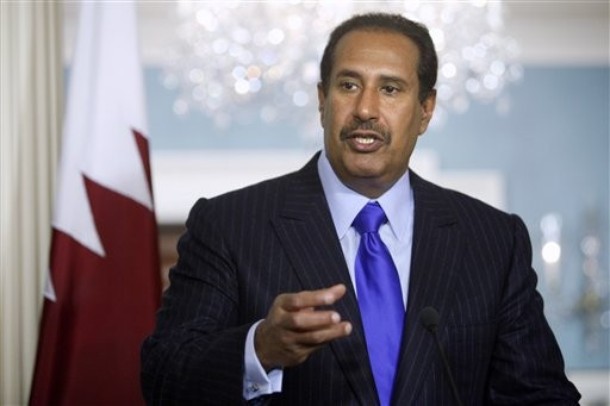 From Martin Chulov, the Guardian:  On Monday, Qatar’s prime minister declared his state’s intent to start helping the Syrian opposition "by all means", including giving them weapons. Two days later, anti-Assad officials received an offer of a $100m (£63m) donation, from their brothers in arms in Libya. Coincidence? Unlikely, if the Libyan revolution is any indicator. . . .

Two probabilities have quickly emerged: the first is that a militarised Syrian National Council is unlikely to be short of suppliers. And, second, Libya is merely a conduit for the $100m, which was at least partly funded by Qatar to get things rolling.

Libya’s national transitional council has been quick to stress that the money it is sending is for humanitarian aid, which is clearly desperately needed in western Syria, withering under a regime offensive. No one in the nascent Tripoli government is quibbling about where the cash comes from. When asked yesterday how a state still in turmoil could afford such a generous gift, an spokesman for the Libyan council replied simply: "It won’t be a problem".

Qatar’s remarks this week, as well as Saudi Arabia’s claim last Friday that arming the Syrian rebels would be an "excellent idea", clearly shows a new reality. The Rubicon has been crossed. Hopes of resolving Syria’s raging insurgency through patience, or dialogue, have evaporated.

From the early days of the uprising against Colonel Gaddafi, Qatar was running more weapons to Libya’s rebels than any other state. Throughout the war, giant Qatari military transporters regularly disgorged tonnes of weaponry in plain view at Djerba airport in Tunisia, not far from the Libyan border. . . .

"We should do whatever necessary to help them, including giving them weapons to defend themselves," said Qatar’s prime minister, Sheikh Hamad bin Jassim Al-Thani, on Monday. "This uprising in Syria now [has lasted] one year. For 10 months, it was peaceful: nobody was carrying weapons, nobody was doing anything. And Bashar continued killing them.

"So I think they’re right to defend themselves by weapons, and I think we should help these people by all means."  (photo: AP)