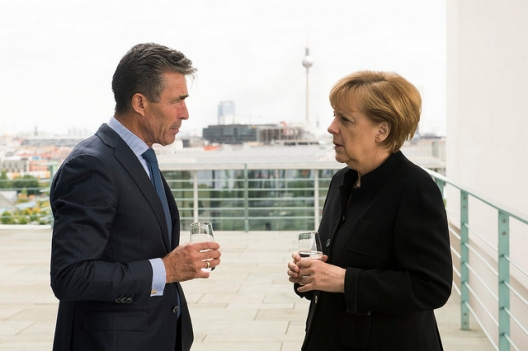 SPIEGEL: But the Ukraine crisis has also shown that many Germans don’t want ties to the West that are too strong. Many would like to see Berlin take on a mediating role between the West and the East.

Rasmussen: That doesn’t surprise me. The Germans are still thankful that reunification was possible so quickly after the collapse of Communism. Hence the notion that Berlin ought to be a bridge between East and West. In this sense Germany has a special role to play. At the same time, given the current events in Ukraine, I would also say: The best way to find a political solution is for the West to demonstrate unity and strength.

SPIEGEL: Is Germany being too tolerant toward Moscow? Should it take on a tougher position through sanctions, for example?

Rasmussen: So far we have succeeded in speaking with one voice within the EU and NATO in the Ukraine crisis. The real test still lies ahead of us, when the European Union discusses the so-called third round of sanctions.

SPIEGEL: Even within NATO opinions about what needs to be done are already drifting apart.

Rasmussen: We have unanimously agreed on all important steps – that’s the basis for all decisions in the alliance. We have strengthened our surveillance of air space, dispatched naval ships in the Baltic and Black seas and turned national military exercises into joint NATO maneuvers. As it did in Afghanistan or in Kosovo, Germany also played a very active role.

SPIEGEL: Within NATO, some are pushing for the stationing of more troops in Eastern Europe. Others, including Germany, do not want to provoke Russia.

Rasmussen: We have to be realistic. Past experiences play a different role in every country. The Baltic states and Poland are fearful for their security in light of Russia’s illegal actions in Ukraine. The Russian actions evoke how Russia treated them in the past. Germany, for its part, remembers the constructive role that leaders in Moscow played at the time of reunification. We have to understand that the nations are coming with different perspectives.

SPIEGEL: Do you believe that German soldiers are prepared to die for Estonia or Latvia?

Rasmussen: That’s a very pointed question and a hypothetical one on top. Let me just say this: I have no doubt that a NATO country, if it is attacked, can count on the aid of all other 27 member states.

SPIEGEL: So you’re saying Article 5 of the NATO treaty, under which an attack on one is considered an attack on all, is not an empty promise?

Rasmussen: Definitely not. Article 5 is the essence of NATO. If we do not honor this obligation 100 percent in an emergency, then this alliance will be dead.

SPIEGEL: Is NATO even capable of defending the Baltic states with its current makeup?

Rasmussen: Yes, we can. At the same time, Russia’s actions in Ukraine also taught us that we need to improve our ability to react rapidly. We are currently developing plans for that.