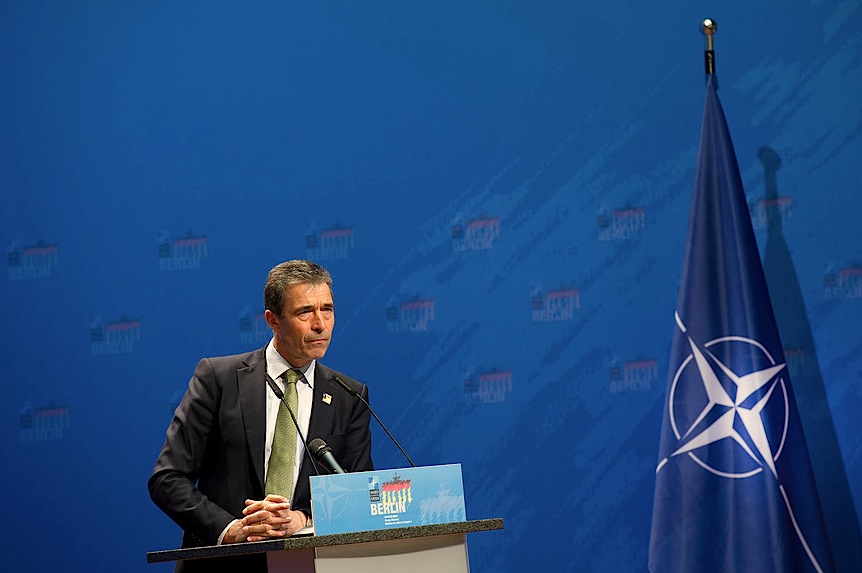 From Andrew Rettman, EUobserver:  Nato head Anders Fogh Rasmussen has said that the alliance would only take action against Syria if Turkey is attacked.

Speaking to EUobserver in his office in Brussels last week, the secretary general of what calls itself "the word’s most powerful military alliance," said he feels "frustration" when he hears about the "outrageous" human rights abuses being committed by Syrian forces.

He said Nato is not going in because the UN has not asked it to.

He noted that: "Even the Syrian opposition has not called on the international community to intervene militarily."

But he said the "most important" reason is that it would do no good.

"It is my firm belief that any foreign military intervention would have unpredictable repercussions because Syrian society is very complicated, politically, ethnically, religiously and the regional context is very, very complex," Rasmussen noted. . . .

"Nato cannot act as the world’s policeman. We cannot travel from country to country to solve every conflict. It’s simply not possible," he said.

"The essence of being a defence alliance is that we are here to ensure the territorial defence of our member states," he added. . . .

"The Europeans lack a number of critical capabilities. One thing is better capacity to gather intelligence and to do reconnaissance … air-to-air refuelling is another issue … and we [European countries] are still missing some capacity in strategic airlift," he said.

"If we are to maintain an American interest in the trans-Atlantic alliance, then the Europeans must also carry a fair share of the burden," he noted.

Some countries, such as France and Poland, also want a "European defence force" to guarantee European security with or without Nato support.

When asked if Nato would back the creation of a parallel EU force, Rasmussen warned against "waste of resources," however.

"I’m not going to interfere with EU decisions of how Europe will structure its defence co-operation. But as a general remark, I think Europe first and foremost needs real military capabilities rather than new structures," he said.  (photo: NATO)