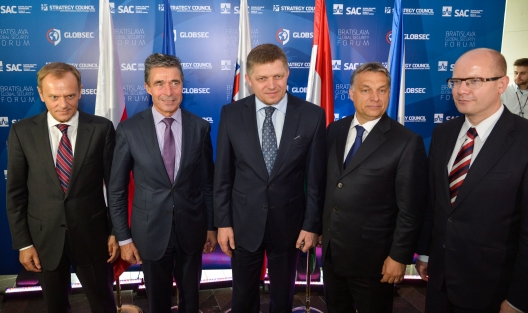 Twenty-five years ago, this part of Europe was the front-line in the fight for freedom. Barbed wire fences were cut. Walls came down. And freedom prevailed over force.

NATO’s Open Door policy and European Union enlargement, advanced our goal of a Europe whole and free. Not by threats, coercion or the use of force, but by the choice of sovereign nations and free people. By free choice, not by force, we erased the deep dividing lines across our continent. . . .

Russian defence spending has grown by more than 10 percent in real terms each year over the past five years. And according to some forecasts that rate of growth could increase in the coming years.

By contrast, several European NATO countries have cut their defence spending by more than 20 percent over the same period. Some Allies have even cut by more than 40 percent. And the cuts have been particularly deep here in Central and Eastern Europe.

This is unsustainable. Now is the time to stop the cuts and start reversing the trend. We have a NATO target of 2% of GDP to be spent on defence. We need to gradually increase our defence budgets to reach that level. We must spend more on what we need. Less on personnel. And more on equipment, skills and training. So that our forces are more flexible, deployable and ready.

Some Allies, like Estonia, are already setting a good example. Poland is very close to the 2 percent benchmark and modernising its forces. While Latvia, Lithuania and Romania have announced that they too will gradually invest more in defence.

We must also bridge the gaps in our military capabilities. This means we need to stimulate further involvement in our multinational “Smart Defence” projects. And also closer regional cooperation. The Visegrad countries continue to demonstrate that this is a pragmatic way to build greater security together. And in a way that makes both NATO and the European Union stronger.

Multinational cooperation can help in multiplying individual efforts. But ultimately, credible defence and deterrence requires credible investment. And if there was ever any doubt in our capitals that defence matters, the Ukraine crisis has surely removed it. . . .

To be a member of NATO is not only a privilege, it’s also a duty. You have some tasks, you have some responsibilities. We would… you would… or whatever it is, would expect other Allies to help if needed. It’s a kind of insurance, and we all know that you pay an insurance premium to get help when needed. And unfortunately, because of the new security situation in Europe, the security… the insurance premium has now gone up.

Excerpts from “Standing up for Freedom and Security” speech by NATO Secretary General Anders Fogh Rasmussen, May 15, 2014.