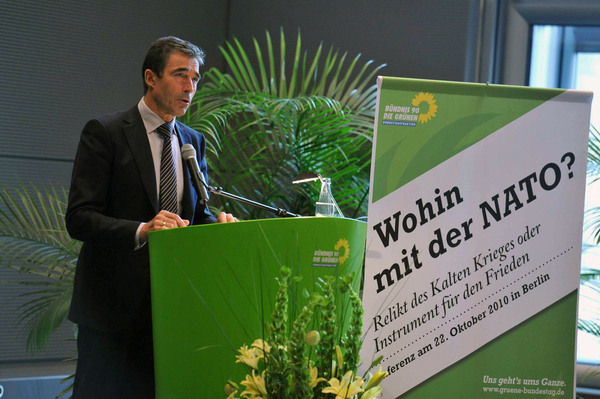 From Anders Fogh Rasmussen, NATO:  I appreciate the opportunity to answer the question you have put on the table – is NATO a Cold War relic, or an instrument for peace?

Let me answer that question straight away. NATO was, is, and will remain an instrument for peace.

Through our operations, we are defending peace. Through our cooperative approach to security, we are promoting peace.

Through our engagement in crisis management, we are preserving peace.

And I believe that NATO’s record proves that, beyond any doubt.

During the Cold War, NATO Allies stood side-by-side to defend freedom and democracy. Through their solidarity, and by sharing the burden of defence, NATO Allies successfully prevented the Cold War from getting hot. And we did not just win the Cold War – we also won the peace. A peace that helped to bring together this country, as well as our continent.

Managing the break-up of the Former Yugoslavia was the next step in consolidating peace in Europe. In Bosnia, in Kosovo, and in the Former Yugoslav Republic of Macedonia¹, NATO-led forces have helped manage crises and build stability. Today, the NATO-led KFOR is trusted, and recognised, by all parties as an impartial peacekeeper. In fact, NATO is today the most effective peacekeeper in the world.

After the atrocities of 9/11, NATO invoked Article 5 of its founding treaty. The core article of the NATO Treaty, which states, that an attack on one Ally is considered an attack on all Allies. Because our fundamental security was threatened from a new source – international terrorism. And the whole international community agreed that, to preserve our security against this menace, we have to prevent Afghanistan from becoming a safe haven for terrorists once again. …

At our Summit in Lisbon next month, NATO will adopt a new Strategic Concept.

An Alliance able to defend its members against modern threats.

An Alliance capable of managing even the most challenging crises.

An Alliance better able to work with other organisations and nations to promote international stability.

An Alliance that will continue to serve as an essential instrument for peace in the twenty-first century.