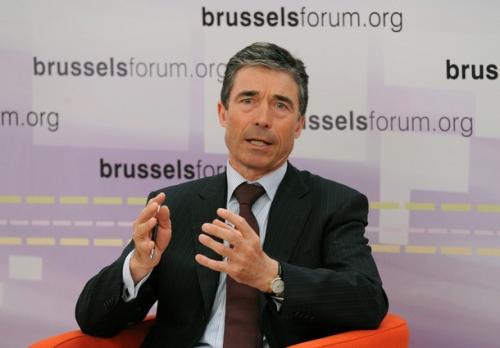 From Reuters: The European Union must put more money and muscle into defence if it wants to become a global player, the head of the NATO alliance said on Saturday.

Secretary-General Anders Fogh Rasmussen also cautioned that Europeans could not take the transatlantic alliance with the United States for granted.

"But this will remain a paper tiger if it is not followed up by concrete contributions when we need concrete military contributions," he said. …

Former U.S. secretary of state Madeleine Albright, who is heading an expert group drawing up NATO’s new mission statement, noted that public support for NATO was at its lowest in the United States. Rasmussen said Europeans needed to show Americans the value of the alliance.

"We Europeans should not take this strong transatlantic relationship for granted," he said.

"The best way to demonstrate the value of the alliance is through practical examples, like non-U.S. allies’ contributions to our operation in Afghanistan."  (photo: Getty)