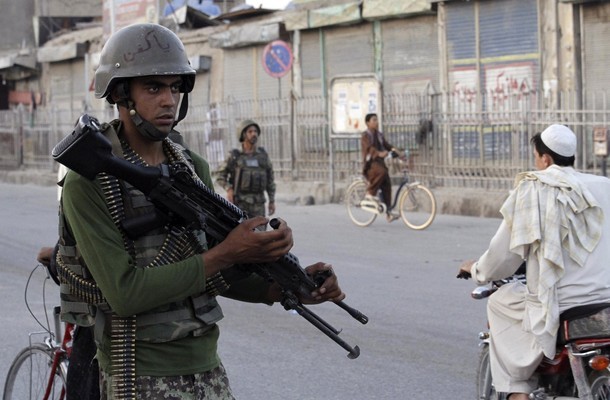 From AFP:  Afghan security forces are dying at five times the rate of NATO soldiers as Taliban insurgents step up attacks ahead of the withdrawal of foreign troops in 2014, the latest figures show.

While deaths among NATO’s troops are regularly chronicled in the 50 countries that contribute soldiers to the war, the daily casualties among the Afghans they are fighting alongside rarely make headlines.

A total of 853 Afghan soldiers and police were killed in the past four months, government figures show, compared with 165 NATO troops, according to a tally kept by the website icasualties.org.

President Hamid Karzai warned in May that the Afghan death toll would increase as the US-led troops start withdrawing and hand increasing responsibility for security to Afghan forces. . . .

Interior Ministry spokesman Sediq Seddiqi said at the weekend that there had been a surge in casualties suffered by police in the past four months, with 635 killed and 1,246 wounded.

"This year, the enemies of Afghanistan have intensified their attacks against Afghan security forces," he said.

"We have increased our operations against the enemy and they also intensified their attacks," he said, adding that 1,730 insurgents had been killed over the same period. . . .

Despite the rise in attacks, the number of coalition deaths in the first six months this year — 220 — was down on the same period last year when 282 died, according to icasualties.org.  (photo: Reuters)