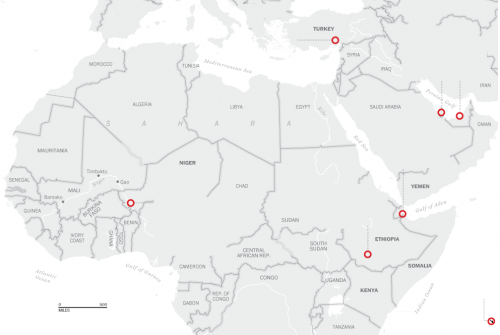 From Craig Whitlock, Washington Post:  The steel-gray U.S. Air Force Predator drone plunged from the sky, shattering on mountainous terrain near the Iraq-Turkey border. For Kurdish guerrillas hiding nearby, it was an unexpected gift from the propaganda gods.

Fighters from the Kurdistan Workers’ Party, or PKK, filmed the charred wreckage on Sept. 18 and posted a video on YouTube. A narrator bragged unconvincingly that the group had shot down the drone. But for anyone who might doubt that the flying robot was really American, the video zoomed in on mangled parts stamped in English and bearing the label of the manufacturer, San Diego-based General Atomics.

For a brief moment, the crash drew back the curtain on Operation Nomad Shadow, a secretive U.S. military surveillance program. Since November 2011, the U.S. Air Force has been flying unarmed drones from Incirlik Air Base in Turkey in an attempt to suppress a long-simmering regional conflict. The camera-equipped Predators hover above the rugged border with Iraq and beam high-resolution imagery to the Turkish armed forces, helping them pursue PKK rebels as they slip back and forth across the mountains. . . .

In the fall of 2011, four disassembled Predator drones arrived in crates at Incirlik Air Base in southern Anatolia, a joint U.S.-Turkish military installation.

The drones came from Iraq, where for the previous four years they had been devoted to surveilling that country’s northern mountains. Along with manned U.S. aircraft, the Predators tracked the movements of PKK fighters, sharing video feeds and other intelligence with the Turkish armed forces.

The Kurdish group has long fought to create an autonomous enclave in Turkey, launching cross-border attacks from its hideouts in northern Iraq. Turkey has responded with airstrikes and artillery attacks but has also sent ground troops into Iraq, further destabilizing an already volatile area. The Turkish and U.S. governments both classify the PKK as a terrorist group. . . .

The Turkish government has acknowledged the presence of Predators on its territory, but the robotic planes are a sensitive subject. A global survey released Thursday by the Pew Research Center found that 82 percent of Turks disapprove of the Obama administration’s international campaign of drone attacks against extremists. . . .

The drones occupy a relatively tiny corner of the sprawling base at Incirlik, according to interviews with other officials and public documents that shed light on Nomad Shadow.

For most of their time aloft, the remote-control Predators are flown via satellite link by pilots and sensor operators stationed about 6,000 miles away, at Whiteman Air Force Base in Missouri.

While in Turkish airspace, the drones cannot spy and must turn off their high-tech cameras and sensors, according to rules set by the Turkish government. It takes the sluggish Predators, with a maximum air speed of 135 mph, about five hours to reach the Iraqi border.

The Iraqi government permits the overflights. Once in Iraq, the Predators usually fly a rectangular route known as “the box” for up to 12 hours each mission as they beam video and other intelligence to Missouri.

U.S. analysts view and evaluate the footage before transmitting it to a joint U.S.-Turkish intelligence “fusion cell” in Ankara, the capital. . . .

The Turkish government has long pressed the Obama administration to devote more flight hours to the operation and to sell Turkey a fleet of armed Reaper drones. But U.S. officials and lawmakers have resisted both requests.

The Pentagon has expressed concern that the Turkish military wants the fruits of the drone surveillance but has been unwilling to consult with Americans on the best ways to exploit it. “There have been a lot of U.S. attempts to help the Turks get better at fusing the intelligence with an operation,” said a former U.S. defense official who spoke on the condition of anonymity to give a candid assessment.

At the same time, the former U.S. official called Nomad Shadow an overall success. The constant stream of surveillance footage has prevented PKK attacks, he said, and has enabled the Turkish military to carry out more-limited, precise counterterrorism operations instead of sending large numbers of troops into northern Iraq.

“It’s been extremely effective in preventing cross-border operations by the Turks,” the former official said.

Image: Map of US drone bases in the Middle East. (graphic: Washington Post)