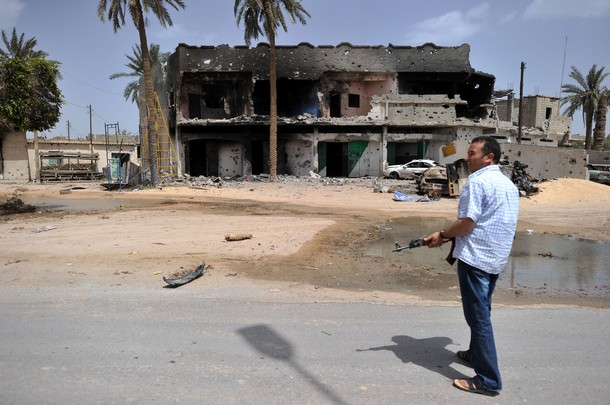 From C.J. Chivers, the New York Times:  At least one NATO warplane attacked a rebel position on the front lines of this besieged city [Misrata] on Wednesday, a rebel commander said, killing 12 fighters and wounding five others in what he called an accident that could have been avoided.

The rebels were at first reluctant to admit the killings had occurred, saying they did not want to discourage further airstrikes against the forces of Col. Muammar el-Qaddafi, which have been shelling Misurata and pounding it with ground-to-ground rocket fire. The pace of NATO strikes had picked up noticeably in recent days, after rebel leaders complained of a lack of support since the United States turned over operational control of the air campaign to NATO at the end of March.

But as the bodies of the fighters who had been killed were being collected at a medical clinic in the Qasr Ahmed neighborhood, a grieving rebel commander, Abdullah Mohammed, provided an account of the errant strikes.

Mr. Mohammed said that as pro-Qaddafi forces tried to outflank the city’s port from the east in recent days, rebels moved into a salt factory and fortified it as a blocking position. They first occupied the building on Tuesday, he said, and informed NATO of their presence.

They continued to occupy the building, and on Wednesday they were struck from the air around 4:30 p.m. “We stayed in exactly the same place,” he said. “And they hit it.”

From Leila Fadel, the Washington Post:  An apparent NATO airstrike killed 10 rebel fighters on Wednesday in the northeast area of Misurata. If the attack came from NATO, it would mark the third mistaken attack on rebel fighters in opposition territory since the airstrike campaign began.

Opposition leaders in Misurata said it was still unclear whether NATO or rockets and shelling from Moammar Gaddafi’s forces killed the men as they drove on a swampy road in northeastern Misurata that leads directly to the port, said Mohamed Ali, a rebel spokesman. On Tuesday NATO had struck a convoy of 30 vehicles from Gaddafi’s forces on the same road as they tried to access the port, he said. The group of four-wheel drive vehicles was decimated, he said.  (photo: Getty)